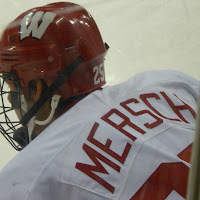 When it comes to prospects currently in the LA Kings pipeline, here’s a quick overview of where things stand…

One, they seem to have an abundance of defensemen. Two, for the first time in franchise history they’re stacked in net. And three, GM Dean Lombardi was probably close to putting a ‘left wings wanted’ sign outside the practice facility in El Segundo.

Quite simply, it hasn’t been a position of strength the last few years. Hence, them taking four – FOUR – left wingers at this year’s NHL Draft. Remember, they only made six selections total. So, point made.

One of those players taken was Michael Mersch from the University of Wisconsin.

In the days following the draft we had Gary Shuchuk on, his college coach and a former Kings forward himself – who compared Mersch’s style and skill to Brendan Shanahan. Enough said, right?

Well, there is much more to the kid’s story.

Having learned the game from his dad early on – a former Calgary Flames draft pick (1986) and two-time IHL Champion – Mersch didn’t get nearly enough time with him. He lost his father to lymphoma when was only seven years old. His dad was just 36.

In part, it’s something that fuels the younger Mersch and his mom has done a fine job raising him into somebody Shuchuk called “A very polite young man. Off ice he’s the kind of guy who’s very well mannered, but on the ice he’s a different story. He plays the game hard.”

After spending time in the U.S. National Development Program, Mersch just completed his freshman year at Wisconsin. Later this summer, he’ll join several other Kings prospects at USA Hockey’s evaluation camp for the team that will compete at next winter’s World Junior Championship.

Fresh off of being selected by the Kings in the fourth round a few weeks ago, the 6-foot-1 Illinois native will make his first ever trip to California for the team’s Development Camp next week.

MM: You actually attended the draft, so let’s start there – what did you take away from the whole experience?

Mersch: It was real exciting. I went down there with my family and I had a couple of meetings with different teams before the draft. It’s a once in a lifetime experience. I was lucky enough to get picked up by the Kings and now I feel like I’m in a good spot.

MM: How many teams total did you meet with before the draft?

Mersch: I tried to fit in as many meetings as I could. I had met with some teams previously in Illinois and some in Madison too. It’s been all over the place. So, in total, I’d say about ten.

MM: Was there anything that stood out from your pre-draft meeting with the Kings?

Mersch: I really felt like they had a deep interest in me. We talked for a long time and got to know each other pretty well. They learned a lot about me and my family, how I play and what my intentions were as a hockey player. So, walking out of that meeting I felt pretty good about things, confident. It gave me a good sense of what they were about too. They seem to do a lot of research on different players.

MM: Why Wisconsin and not another NCAA program?

Mersch: I looked at some schools out west, like Colorado College, and some schools out east. But, Madison, the campus is just gorgeous and the hockey program is top notch. Plus, it was close to home. So, it just felt right for me. I committed my freshman year of high school. So, I was real young and it was a while ago. But, it’s been the right decision. I love my teammates and my coaches are great. So, it’s a lot of fun and I’m getting better as a hockey player here.

MM: You were also drafted by the Erie Otters (OHL) in 2008. Did you ever consider going the junior hockey route?

Mersch: I would say I didn’t look too much into it.  I was pretty much set on getting a degree, that’s one of my goals in life – to come out of college with a degree. Being able to do that, no matter how long it takes me to finish, is something that’s important. So, college has always seemed like the right route for me and I feel comfortable here.

MM: Is that a promise you made to yourself or your family?

Mersch: A little bit of both. My mom has been supporting me throughout my whole hockey career. It’s always nice to have something to fall back on if hockey doesn’t work out. At the same time, I’m putting all of my efforts into hockey and hopefully I’ll become an NHL player some day.

MM: Talk about your time with Team USA. Your goal total dropped off your last year there. What happened?

Mersch: It’s something I look back on a little. But, I try not to pay too much attention to it. It was a funky year. I learned a lot about myself. I had to develop a lot of mental toughness to get over the funk. It was a little set back in my career, but everybody has little setbacks before they can go forward. So, that’s the way I put it and I just take motivation from it to work even harder and get better at my game.

MM: After the challenges you had at the end of your run with Team USA, what were some of the emotions when you found out you were invited back to the evaluation camp this summer?

Mersch: It’s such an honor to represent your country, first of all. But, I’m going into a camp where I know I’m going to have to work hard and hopefully fight for a spot on the team. Hopefully I can help that team win a gold medal someday. When you have a chance to play for your country you have to work to be the best you can be.

MM:  Some of the same guys you were teammates with in the U.S. program are now Kings prospects and you actually faced off against them a few times this year at Wisconsin.  Tell us about Nick Shore (2011 third round draft pick), what do you think of him as a player?

Mersch: He’s a great player. He thinks the game real well. He’s highly skilled. I didn’t get a chance to play against him this year (vs. Denver) actually because he was out. But, being able to play with him for a few years before we went to college was a huge honor. I’m excited to see him again (at camp) and hopefully we can play together.

MM: How about Derek Forbort (2010 first round draft pick)?

Mersch: Yeah, he’s got the size! He’s mobile and he has a great hockey sense, as well. He’s a highly skilled player who is only getting better and better. He’s going to be a great NHL player someday.

MM: Do you have any personal goals, on the ice, for next season?

Mersch: Obviously, point-wise and goal-wise, I want to increase those numbers. I’m working on my shot, my skating, getting quicker. There’s nothing completely specific, but I also want to sharpen my mind and learn more about the game. It’s endless on how much you can pick up. I just want to be better and work off my teammates. Developing good chemistry with my linemates should put me in a good spot next year.

MM: What are you most looking forward to at Kings camp?

Mersch: I’m excited to see how I compare against other prospects. It will be good to meet everybody too. I’ve never been to California before. So, I’m looking forward to a little bit of that as well. It’s going to be fun and it’s going to be hard – I understand that.

MM: It’s time to put your Kings knowledge to the test. There are five retired numbers hanging inside Staples Center. How many can you name?

MM: No. But, I’m sure he would be proud – being a fellow Badger and all.

(He made me tell him the other four and to Luc he said ‘Yeah, I should have known that one.’)

MM: You’re an American born player, so we have to ask – Chris Chelios or Brian Leetch?

Mersch: Growing up in Chicago I was able to watch Chelios play a lot. He’s always been a great player and I want to go with him, but, I don’t know. That’s a tough question to answer. They’re both such great players.

MM: At forward, Roenick or Modano?

Mersch: Hmmm. You keep throwing Chicago guys at me. I’m going to have to go with JR there.

MM: If the day comes that you’re lucky enough to make it to the NHL, what number would like to wear and why?

Mersch: You know, I’ve been switching my number up quite a bit lately. It’s been different the past three years. But, I like #25. That’s what I’m wearing right now. At the beginning of the season it didn’t mean much to me. It was like my second or third choice. I like it though. It’s been doing me well so far and hopefully I can stick with that number throughout my career.

MM: Who’s been your biggest influence?

Mersch: I’ve had a lot of influences. My dad passed away when I was seven years old. He played in the minor leagues for Pittsburgh and Calgary. He had a huge impact on getting me started in hockey and I look at him for most of my motivation.

And I’m sure he’d be a proud papa too.

Solid kid, with a good head on his shoulders.

Who knows, maybe someday he’ll even fill a hole for the Kings at left wing.