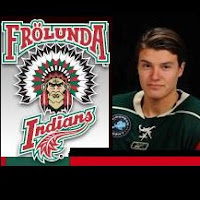 Michael Schumacher is a man of many teams.

He split time last season between Frolunda HC‘s under-18 team and under-20 team, the latter of which is part of the SuperElit, Sweden’s top junior league. In his 22 games with the big club he picked up seven points (four goals, three assists), to go along with his 12 goals in 10 games with the u-18 squad.

Then, two weeks ago, he was drafted twice in a matter of days – first by the Kings.

With Los Angeles in desperate need of some left wing depth throughout the organization, they selected him in the seventh round of the recent NHL Draft. Now, the 6-foot-3, 198 pound 17-year old is headed to California for next week’s Development Camp.

Prior to departing his native Sweden for the States, I spoke with him by phone to talk about what’s been going lately and his plans for the future.

MM: Starting with the NHL draft – how did you find out and did you even know the Kings were interested in you?

MS: Todd Woodcraft (the Kings European scout) called me a few minutes before they picked me and told me to watch the draft on the internet. That’s how I found out.  I was first contacted by him around February or March.  So, I knew they were following me a little bit. But, I wasn’t sure I was going to get drafted. It was a big surprise for me.

MM: Let’s get the obvious question out of the way – how annoying is it to have people always confuse you with the race car driver Michael Schumacher?

MS: It’s not much of a bother to me anymore. I’m gotten used to it by now. I get a lot of questions about it all the time though. New people are always asking me. I’m used to it though. It’s no big deal at this point. It’s pretty cool actually.

MM: You’re listed as a power forward, but how would you describe your game?

MM: What area of your game do you think you need to work on the most?

MS: Tough question. Everything I guess. I’m not good enough to play in the NHL yet. But, I’m hoping in a few years I will be there. I’ll keep working on my speed – because it’s good to be a fast player and get to the net quickly.  I also want to be a strong player and be good with the puck.

MM: A few days after the NHL Draft you were taken by the Owen Sound Attack (OHL) in the CHL Import Draft. Same as before, how did you hear about it?

MS: My agent called me. I was actually on the ice training when it happened.  So, I didn’t know until about an hour or two afterwards. It’s pretty exciting though, being taken in the first round there.

MM: Will you be coming over to play in North America then?

MS: Of course, it’s a dream to play there. The junior hockey there is really good. My agent has spoken to Frolunda and in a few days I should have a better answer about that.

MM: Do you have time left on your contract with Frolunda?

MS: I don’t have a contract with them right now. We just want to make sure everything ends well with that team.

MM: How about the World Junior tournament – is that a goal of yours or is that not something you’re focusing on right now?

MS: It’s definitely a dream of mine. I’m willing to do anything to get noticed by the Swedish national team and I would love to play there. I’m hoping this season helps me get a chance to do that.

MM: What are you looking forward to the most about coming to the Kings Development Camp in LA next week?

MS: Everything! I’ve never been to the USA before. Plus, it’s a great team and a great organization, so everything. The whole thing is just exciting to me.

MS: No. I didn’t choose this number, it’s just the number they gave me when I started playing with Frolunda. So, we’ll have to see about that (going forward).

MM: What number would you prefer to wear?

MM: Who is your favorite hockey player of all time and why?

MS: Peter Forsberg, of course. He’s a big idol of mine. Actually, I was born in Örnsköldsvik, where he was playing. So, I watched a lot of games there and everybody in that city likes him. He’s a great player and it’s really bad that he had to end his career so early. I feel really bad for him.

Several current NHL stars have come through the Frolunda HC system – including Henrik Lundqvist (Rangers), Daniel Alfredson (Senators) and Kristian Huselius (Blue Jackets).  In fact, Lundqvist and the Rangers are scheduled to play an exhibition game vs. Frolunda‘s main team (from the Swedish Elite League) before opening the regular season vs. the Kings in Stockholm.

Of course, Schumacher plans on being in Canada at that time, beginning his time as a junior hockey player in North America.

I’ll have more pre-camp interviews up later today.  In the meantime though, please check out the links below for some other articles that have recently posted.

UPDATE: 8/27/2011 – Schumacher has been traded to the Soo Greyhounds. For some related links on the ‘Hounds, check out a few of the interviews with their GM Kyle Dubas that have appeared here on MayorsManor – this article provides a few comments on Colin Miller and Michael Kantor, who also attended Dev Camp last month. Plus, we have an in-depth interview with Dubas up here.