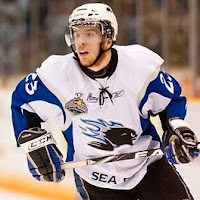 Defenseman Pierre Durepos is no stranger to the highs and lows of a hockey life.

Originally taken 10th overall by the Saint John Sea Dogs in the 2009 QMJHL draft, he recently saw several of his teammates go on to be drafted by various NHL teams.

Less than two months ago they collectively won the 2011 Memorial Cup, junior hockey’s top prize. Now, he’s an individual searching for a spot on an NHL club’s depth chart.

Next week, he’ll take the next step in his hockey career, joining five other free agent defensemen for the Los Angeles Kings 2011 Development Camp.

As he prepares for his first trip out west I had a chance to catch up with him for some perspective on what lies ahead and some opinions on a few of the Kings prospects he’s played against.

MM: Obviously winning the Memorial Cup was the highlight of the tournament, however what other memories were you able to take away from the experience?

PD: Just the whole experience, the whole week and a half we were there. It was just surreal. Everything is so magnified. It’s such a big, national event that you feel the pressure on you for the whole time. It’s something that I’ve never done before and it was quite the experience.

MM: The final game of the Memorial Cup was your 180th consecutive game. What do you attribute that streak to and how important is it to you?

MM: You’re a big junior hockey fan too – you were a season ticket holder for the Moncton Wildcats, right?

PD: Before I played in the ‘Q’, for about five or six years my dad and I had season tickets for the local Moncton team. So, yeah, it’s pretty weird now playing in that league after having been a fan for so many years. Playing against the Wildcats is pretty weird.

MM: Like a lot of players, you’re on twitter. How did you get started with that and what do you think of it all?

PD: Just this past season, one random day, all the guys decided to sign up and try it out. I don’t really do a whole lot of tweeting though. I just like to have it and follow certain people to get some good information off of it, that’s for sure.

MM: How about being a redhead, the Sedin twins get a lot of pub for being gingers – does it bother you to be called a ginger?

PD: It doesn’t really matter. It’s just a hair color. Obviously, you get teased about it and people try to make fun of you. But, I try to ignore those people and don’t really care. That’s what I was born with and I just have to accept it.

MM: Let’s turn to the NHL. In your opinion, who’s the best defenseman in hockey right now?

PD: Right now, whew – there’s a whole bunch of them. (Nicklas) Lidstrom is pretty good, Drew Doughty, Zdeno Chara in Boston, Mike Green in Washington. They’re all top-notch d-men. Nowadays in the NHL everyone is so good, so it’s pretty hard to pick out just one guy.

MM: Talk about coming to camp a little bit – how did you get the invite, how did it all come together?

PD: Once the draft was over and I wasn’t taken I thought I’d probably get the opportunity to get a tryout somewhere. Fortunately for me, two or three days later one of the scouts for LA called me and asked if I was interested in going to the camp. It was a no-brainer for me. Obviously I wanted to go to an NHL camp, so I was pretty happy.

MM: What do you know about the Kings?

PD: In the past couple of years they’ve been a really competitive team. We don’t see a lot of them on TV here – maybe sometimes if they play a Canadian team. They have a lot of good players, like Doughty and now Mike Richards from the Flyers. So, we know that LA is a good organization and a good team.

MM: Let’s put you to the test, there are five retired numbers hanging up at Staples Center. How many of them can you name?

PD: I’m going to guess Marcel Dionne is one of them.

MM: Yes. Any others?

MM: Well, Luc Robitaille will probably be at least a little disappointed. Not only is he a former Quebec leaguer, your team has won the trophy named after him for two straight seasons.

[note: the Robitaille Trophy is awarded each season to the QMJHL team that scores the most goals during the regular season.]

PD: Well, I should have said Gretzky and Robitaille, but I don’t think I would have guessed the other two (Dave Taylor and Marcel Dionne).

MM: Play scout for us for a moment. You played against the Kings four prospects in the ‘Q’ this year. Let’s get some thoughts on each of them. First up, Montreal goalie JF Berube.

PD: We actually played them twice, early in the year. He’s a good goalie. Montreal finished second in the league and he was probably a big reason for their success.

MM: How about Maxim Kitsyn, the Russian sensation for Mississauga?

PD: We played two games against them (in the Memorial Cup) and from what I remember he’s a big, powerful forward with a lot of skill. He’s a good player, so he’s definitely a good prospect. When we played them he was a guy who we had to key on and had to make sure he didn’t get good opportunities because he’s a dangerous player.

MM: In the finals of Quebec league playoffs you guys beat Gatineau in a thrilling six game series, with two of the games needing double overtime. One of the Kings top defensive prospects, Nic Deslauriers, was part of that team. Tell us about Nic.

PD: I’m definitely going to have to say Nic. He’s a drafted player and he’s signed (with the Kings). So, I definitely have a lot of work to do to catch him.

MM: How about Christopher Gibson, the goalie just drafted by LA a few weeks ago?

PD: He’s a good goalie. He plays over at Chicoutimi, which was a pretty young team this year. But, he was up there in all the goalie categories for the league. I actually played against him in the Telus Cup in midget hockey. He played for Notre Dame. I played against him there and then the last two years in the ‘Q’. He’s a really good young goalie. So, I think LA did well in picking that guy.

MM: Is it going to be weird at all to be in the same camp with some of these guys you’ve battled with during your time as a Sea Dog?

PD: Yes. It’s weird when you go to camps like that – when you’re in the same dressing room and on the ice together. So, it’s definitely going to be weird, but it’s also going to be fun – meeting them and talking with them, seeing how they are as people. It should be a cool experience.

And put him one more step – even if it’s a small one – closer to his goal of someday playing in the NHL.

Links to other pre-camp interviews are provided below and a few more will be posted later today.

Interview with Luc Robitaille – 20 questions for #20