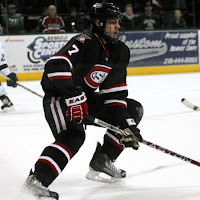 For those who follow the Los Angeles Kings prospects, especially the defensemen, you’re probably familiar with names like Derek Forbort, Thomas Hickey and Viatcheslav Voynov.

Yet, start to remember the name Kevin Gravel.

The 6-foot-4 blueliner recently wrapped up his freshman season at St. Cloud State University, where he won William Radovich Award for the most improved player.

He’s also been invited to Team USA’s evaluation camp next month for the upcoming World Junior Championship. Several other Kings prospects will be there with him and being selected for the team that will compete at next winter’s tournament would certainly raise his profile.

First things first though. He’ll be in LA for Development Camp on Monday and I recently spoke with him…

MM: What have you been up to since the season ended?

KG: Well, we had spring workouts until school ended. Then, I headed home for a little over a month and now I’m back in St. Cloud working out with the guys that are here and getting ready for Development Camp in LA.

MM: Now that you’ve had some time to process everything, what was the high of the season and the low? Any regrets?

KG: There aren’t really any regrets. Obviously, it would have been nice to go further, maybe live up to some of the expectations we had. But, by the end of the year we were a very good hockey team that could beat anyone in the country. My ‘high’ of the season would have been the little stretch where we had a six game winning streak. We also had a real good stretch towards the end of the season against North Dakota, Denver and Wisconsin too. That really had us feeling good. Unfortunately, we just couldn’t keep it going.

MM: Speaking of those schools, the Kings already had Forbort (UND), who we’ve spoken about previously, and they just drafted Nick Shore (Denver) and Michael Mersch (Wisconsin). Any memories from playing those two guys this year?

KG: First off, they’re two really good players. I’ve actually played against them for a few years now going back to the NAHL and USHL, so I’m pretty familiar with going up against them. Both guys are really capable in the offensive end. As a defenseman, you definitely have to take notice when those two are on the ice.

MM: Talk about being invited to the Team USA evaluation camp this summer – how did you find out, how excited were you, was it a goal, etc.

KG: They actually sent me an email telling me I was invited. It basically explained the whole process leading up to the camp and how it all works. I can say I was very excited. It’s a very prestigious camp, and the tournament too. It’s always been a goal of mine, not only to be invited to the camp, but to play for the World Junior team. So, I’m really looking forward to getting out there and beginning the whole process of trying to make the team.

MM: You were in LA last year for camp. Coming back for the second time, what are you looking forward to this time around – anything in particular?

KG: I wouldn’t really say anything in particular. I’m just looking forward to getting out there and showing everyone what I can do. I think it’s good to get out there and see how you compare to everyone else in the organization – just to see where you’re at and the strides that you’ve made over the year. Last year, I didn’t really know what to expect coming in, with it being my first year. So, I’m ready to get back out there, having that under my belt now.

If he has anything to say about it, you’ll be hearing it a lot more this summer.

More prospect interviews are on the way. In the meantime, please check out some of the links below for articles that have been posted in the last week or so – including Tyler Toffoli, Jordan Weal and 2011 draft pick Michael Schumacher.