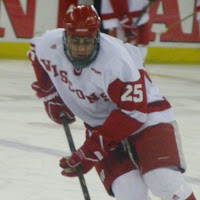 The theme of the day must be ‘full circle.’

Not only did Ryan Smyth return to Edmonton today, but we’re joined by Gary Shuchuk.

In 1990 he led the the Wisconsin Badgers in goals and won the NCAA hockey championship. After playing for Barry Melrose in the AHL and with the Kings in Los Angeles, he’s returned to his roots.

This season he was hired on as an Assistant Coach for the men’s hockey team at his alma mater.

His connection to the Kings was strengthened yesterday too, when one of his players – Michael Mersch – was drafted by the team in the fourth round.

Afterwards, I spoke with him…

GS: He’s a big kid and he’s a very polite young man. Off ice he’s the kind of guy who’s very well mannered, but on the ice he’s a different story. He plays the game hard. He’s a big body. One of the things he’s going to have to improve on, and he knows this, is his skating – which he has been. But, from the hash marks down below the dots, he’s as best as I’ve seen. And he’s going to better – controlling the puck, using his body, driving to the net, etc. He has an NHL shot right now, it’s a quick release. Being a sophomore now in college, he has huge upside.

The kid just wants to learn, he’s just a huge sponge. I’ve worked with him almost daily and he just wants to learn and get better and better. That’s just the way this kid is. I think the Kings are very fortunate to get him. They’re going to have, I really think, a diamond in the rough here. He came from the U.S. Development program, where he had one good year. He had like 20 goals and then the next year he had seven. So, some people kinda wrote him off. But, I think it was good for him. He really matured after that.

MM: When you say he needs to work on his skating, what has be been doing to improve in that area?

GS: At UW we have one of the best strength and conditioning guys in Jim Schneider. During the off-season a lot of ex-Badgers and pro guys come back to Madison and train with him too. Jimmy’s working on his speed, on his off-ice power right now – just, basically, his first few strides. Once he gets going, he’s quick. But, like I said, he’s a big body. So, when he’s playing the wing, just to get him off the boards and to have that separation of speed, that’s what he’s working on. It’s coming, it’s there. But, if he can take the speed he has down near the hash marks in the offensive zone and get it from a stop, he’s going to be a deadly player.

MM: A lot of fourth rounders aren’t present at the NHL Draft. However, Michael was there. Is that something where he was expecting to be taken higher or did he just want to be there for the experience?

GS: I think it’s both. When the last Red Line Report came out he was ranked around 50th. So, he was probably projected to go around the mid-second round. But, the way the draft was, there were a lot of surprises – guys that weren’t supposed to be taken early were taken early, so it kinda pushed the whole draft down. I think for Michael, being that it was only about a four hour drive, for all our kids that were drafted this year, they all went up just for the experience of the draft. Even if they didn’t get drafted, the exposure of being around all the guys, the agents, the players, etc. I’m sure he was hoping to hear his name called. I saw the picture of him putting on the Kings sweater and going down to the table. That’s a cool thing to have happen and it’s part of his hockey memories that he’ll always keep with him.

MM: He’s listed as a left wing. Did you guys move around a bit or is that pretty much where he played all year?

GS: For the most part he was playing wing. He plays left wing primarily, but he can play his off side too. So, he’s comfortable either way. He’s going to be a power forward. I told him the guy I think he can emulate is Brendan Shanahan. He’s a power forward who can shoot the puck. Micheal plays with a lot of grit. He’ll go and battle in front of the net. On the power play he’s a big body. He has good hand-eye coordination. So, he’s in the Brendan Shanahan mode, I believe.

Wisconsin played North Dakota, St. Could State and Denver last season. Thus, Shuchuk had a chance to see three other Kings prospects in game action – Derek Forbort, Kevin Gravel and newly acquired Nick Shore.  So, he’ll be back soon to share some opinions on those guys.

[update: the second Shuchuk aricle is up now – check it out at this link]

On the same weekend though that Ryan Smyth left the organization, to think they may have picked up a Shanahan like replacement in Mersch…that has to be pretty exciting for Dean Lombardi and company.

Even if he’s still a few years away from being an NHL player.