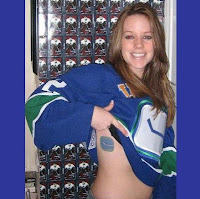 Tired of hearing about the Bruins and/or the Canucks? Fear not, that will die down in the next week of so. Plus, you have the NHL Awards coming up next week. Then, the NHL Draft next weekend. Before you know it, free agency will be here.

For now though, how about a Kings related story to get your weekend off to a great start…

A few months back Matt Greene was the judge of a tattoo contest on LAKings.com. Basically, fans were encouraged to send in photos of their ink and Greene would determine who had the best stuff.

Why Greene you ask? Well, the man knows tats – as evidenced by his left leg. Rather than a half-sleeve, I’d guess you’d call it a full-quad? I don’t know.

Anyway, throughout the season during various conversations I asked Greener for his opinion on different teammates. As he looked around the locker room he would offer up his suggestion on their first trip to a tattoo parlor.

With some never before published comments, here’s what each of these guys should get, according to Matt Greene…

Drew Doughty – “He wants to get his family crest, but I doubt he’ll actually pull through on it. He’s a little gun shy about the whole ‘it’s there for life thing.'”

Willie Mitchell – “Maybe a stock portfolio, somewhere on his arm.”

Kyle Clifford – “Something really tough, maybe brass knuckles. But, when we talked to Cliffy about it he wants to get a big wolf.”

Ryan Smyth – “I don’t Smitty’s going to get a tattoo. But, if he did, it would be Canada. It would be a maple leaf, like 70% of the other Canadians that you play with.”

Dustin Brown – “His kids portraits, right across his back.”

Jarret Stoll – “Stolly? That’s tough. It’s always changing with his style. That would be a temporary one, for sure.”

Jonathan Bernier – “He already has enough. I might take a couple of his off. He has some bad ones. He knows which one too.”

Jonathan Quick – “He got one last summer, so he’s pretty fresh. I can’t give him anymore right now. He’s joining in though. He’s going to get some more.”

With dozens of tattoo shops in Vegas, who knows – maybe he can get some fresh color during the NHL Awards next week. If I see him there, expect a a follow-up to this article.

The Mayor vs. Matt Greene

Matt Greene on what the Kings need