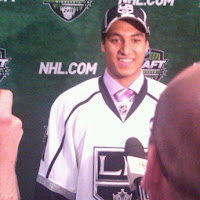 In a little bit of a surprise move – or what some might call a Dean Lombardi draft day special – the Kings selected a goaltender with their first pick (#49 overall) in the 2011 NHL Draft.

LA traded away their first round selection in the Dustin Penner deal earlier this year. So, the team didn’t hit the podium until the second round, where they announced ‘We proudly select Finnish goaltender Christopher Gibson.’

He played last season in the Quebec Major Junior Hockey League, where he led all goalies with a .920 save-percentage and was second overall with a 2.42 goals-against average. He was named a First Team All-Star.

Gibson lists Mikka Kiprusoff as his favortie athlete – a netminder Lombardi is very familiar with from his days in San Jose.

The Kings also know about goalies coming out of the QMJHL, having recently taken Jonathan Bernier and JF Berube from the junior circuit.

To see what the Kings did in the third round click here.