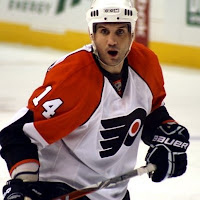 Certain things in hockey are just the way they are.

For example, if Bob McKenzie says it’s true, it pretty much is.

If Marcel Dionne shares what a player needs to do to become a more prolific scorer – and he’ll gladly tell you more than that! – it must be fact.

And if Ian Laperriere gives you a thumbs up or down on a guy he’s played with, you can take it to the bank.

Laperriere, a former Kings forward and fan favorite everywhere he’s played, has made several visits to MayorsManor through the years – never offering up cliches and generic answers. What you see with Lappy is what you get. He wears his heart on his sleeve… regardless if he’s wearing a jersey or a t-shirt.

So, when the Kings traded for Flyers’ captain Mike Richards last week, I thought he’d be the perfect guy to reach out to.

Who is Mike Richards? Is he the uber talented center who helped take the Flyers to the Stanley Cup Finals and won a gold medal with Team Canada? Or is he the temperamental, immature star-to-be the Philadelphia media made him out to be?

Here’s what Lappy had to say…

MM: What type of player did the LA Kings just acquire?

IL: He’s a character guy. He’s a leadership kind of guy. The bigger the game is, the bigger his game is. He’s a great guy too. I got along really well with him. I just spent a day with him about a week ago. He’s just one of those kids who will do everything for the team. He’s not the biggest talker in the room or anything like that – but when the puck drops, he’s there and he’ll give you 100%. He’s a winner too. He’s won the gold medal and he was a big part of that Team Canada group at last year’s Olympics. I think the Kings are going to be really happy about having him on their team.

MM: When you win something so big, like a gold medal or a Stanley Cup, you come out of it a much different player. Did you notice anything different about him – either on or off the ice – after the Olympics?

IL: I’d say he was pretty much the same. He matured last year from the year before. But, he’s been a winner everywhere he’s been. He won the Memorial Cup in junior. He won the Calder Cup (AHL) his first pro year. He won the gold medal too. He’s a winner. That’s something nobody can take away from him. He’s won before, every place he’s been. It’s an experience that until you win, you won’t get – and he’s won everywhere he’s played.

MM: You mentioned him not saying much in the room. A lot has been made about his supposed poor relationship with the Philadelphia media. What do you say in response to those who claim he was a problem in the locker room and the Kings should be worried about similar issues in Los Angeles?

IL: No, that’s all blown out of proportion. It’s one of those things where sometimes the media picks up some stuff and they make a big deal out of it. You know what happened – sometimes we’re not all best friends in the locker room. Every team is like that. When you get an older generation, like me, Chris Pronger, even Odie (Sean O’Donnell) coming in this year, you don’t agree with everything the young guys are doing today. It’s the same thing in the Kings locker room and it’s the same thing in Washington’s locker room. It just happened that it got blown out of proportion. It was nothing that big. Everybody got along pretty well as a team (in Philly). It’s just that Richie doesn’t say much, but what can you say? He’s just the kind of guy that when the puck drops, he’ll play for his team. But, he won’t come up and say anything to the media. You just can’t expect him to be in front of the TV all the time. He’s pretty quiet and reserved. Sometimes that rubbed the media a little bit of the wrong way. When they see the opportunity to put him down a little bit, they do so.

MM: The Kings have their own quiet leader, captain Dustin Brown. He’s somebody who was just coming into the Kings organization as you were leaving, but you know him. How will adding a guy like Richards help Brown?

MM: What do you think of this line – Kyle Clifford, Richards and Brown?

IL: With the way the league is now, it’s a physical league. Look at Boston, they won the Cup with their physicality. You know me, I like that physical play too. You can never have enough of that. I like Clifford a lot. I like his guts. He doesn’t turn down anybody, he’ll fight anybody.

It’s settled then.  Richards and the Kings will be just fine.

[update: part two of this interview is now up here – Laperriere talks about his health, life after hockey, Luc Robitaille, the NHL Awards and more]