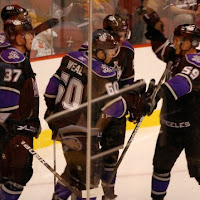 Jordan Weal posted 102 points (35g, 67a) for the Regina Pats during the 2009-10 season. Even though that was only four points fewer than the more highly touted Taylor Hall and Tyler Seguin, cynics wondered if he’d be able to post such large numbers again this season without Jordan Eberle.

Guess they were right.

He could only muster 43 goals and 96 points this year.

All jokes aside, the Kings were somewhat surprised when Weal was still on the board in the third round of last summer’s NHL Draft. They nabbed him and have continued to be impressed ever since. He looked solid at both last year’s Development Camp and again in Rookie Camp prior to the start of the season. His speed and shot were on full display in the two-game series with the Phoenix Coyotes rookies.

After his WHL team missed the playoffs for the third straight year, he headed east to Manchester (AHL). He played in seven of the teams final regular season games, picking up a single assist for his efforts. In part, that led to him being a healthy scratch for the Monarchs run through two rounds of the playoffs.

In a few weeks he’ll be back in Los Angeles, where his whole journey to the NHL began one year ago. Since then, he’s been a guest on MayorsManor numerous times and today he checks in again with some pre-camp comments…

MM: Let’s start with Manchester. Any thoughts about your time there at the end of the season?

JW: It was a great experience. They had a really nice group of guys who made it very comfortable to fit in. It was great to get into some games and get used to the speed of the game there. It was just unfortunate to have an early exit from the playoffs.

MM: Was there any one player you bonded with this time around – obviously you already know several of them…

JW: Not specifically. All of the guys invited me to do stuff and because most of the guys lived together, you get to know a lot of the guys pretty well.

MM: Let me spin in a little different then, several of them – especially Thomas Hickey and David Kolomatis – like to play pranks. Did anybody get you in the few weeks you were there?

JW: No. Those two and Martin Jones all mess around. But, most of it was directed at one of the other two.

MM: You signed you entry level contract since we spoke last. How great was it to finally ink that deal?

JW: It was very exciting. It was one of my goals going into my 18-year old year with the Pats and it’s always pleasing to reach a goal. The LA Kings are a great organization and are heading in the right direction so hopefully somewhere down the road I can help. My agent didn’t really tell me anything until right before. I was in my hotel room in Manchester when he called me with the news. It was awesome to hear.

MM: Development camp is coming up in less than two weeks. What are you looking forward to about being back in LA?

JW: Coming back to LA is exciting. It’s an awesome city and it’s always nice to be back. I only took off a little more than a week when I came home from Manchester. I’ve been training and working hard ever since. So, I’m ready.

For previous interviews and notes on Weal please click one of the links below – or for more information on this year’s Development Camp roster click here.

Interview with Thomas Hickey – more about the pranks in Manchester