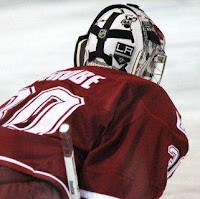 Hollywood is headed to Los Angeles.

Goaltender JF Berube – nicknamed Hollywood – finished his junior season as one of the top goaltenders in the Quebec league (QMJHL). After playing in 50 regular season games he had a 2.60 goals-against-average (fourth best in the league), a .902 save percentage (sixth best), 32 wins (second best) and three shutouts (tied for third most).

His Montreal Junior team swept thier first round opponent, the Halifx Moosseheads. But lost their second series to the Lewiston Maineiacs 4-2 (including an overtime and a double-overtime game). He finished the post-season with six wins in 10 games played, a 2.79 goals-against-average and a 0.901 save percentage. His two shutouts tied for the league lead.

Originally selected by the Kings in the fourth round of the 2009 draft, Berube has been a guest on MayorsManor numerous times and he’s back today to offer up some pre-camp comments…

MM: First off, any comments on fellow Quebec league goalie Christopher Gibson – the Kings just drafted him in the second round last weekend.

JFB: I didn’t play him a lot. But, I know he’s a very good goalie. He’s square to the puck and has good feet.

MM: You recently signed your entry level contract. How good does it feel to have that behind you now?

JFB: I’m really happy that the Kings decided to put me under contract for the next three years. I really like the organisation and all the coaching staff, so it was really good news for me.

MM: Any thoughts on coming to camp?

JFB: I should be down in LA. But, obviously, I won’t be going on the ice. I’m still recovering. I recently had minor hip surgery.

MM: Assuming the rehab goes well this summer, have there been any conversations yet about where you might play next year?

JFB: I can’t tell yet. It’s probably going to depend on where things stand with this hip thing. We should know more later in the summer.

Another thing coming up this summer is his 20th birthday. That’s July 13, the day after camp ends.

Also, as noted the other day, his junior team in Montreal was just purchased by a group that includes former King Ian Laperriere. The team is expected to change its name and colors before next season.

Berube is most likely headed to Ontario (ECHL) next year, barring a trade of one of the other goalies in front of him this summer (i.e. JeffZatkoff, Martin Jones or Jontahan Bernier).

He made his professional debut with the Manchester Monarchs (AHL) in April 2010. In three games with the Monarchs, he posted a 2-1-0 record with a 3.67 goals-against-average and a .855 save percentage. He also was signed to a tryout contract there this spring. However, he didn’t play in any games this time around.

For previous interviews with Berube please click one of the links below – or at the very least, check out his super cool UFC inspired mask.

More notes on this year’s Development Camp roster can be found here.