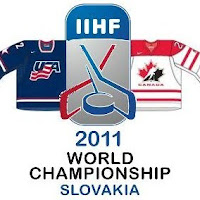 And while it won’t have the same meaning of last year’s Winter Olympics, the two countries will square off once again today in the Qualification Round at the IIHF World Championships.

Jack Johnson is part of the defensive group for the U.S., who went 2-1 in the preliminary round, beating Austria and Norway – and losing to Sweden. In those three games, he had two assists and tied for second-best on the team with 11 shots on goal.

Meanwhile, Canada went 2-0-1, with wins over Belarus and France. They needed overtime to beat Switzerland in their last contest. Kings goalie’ Jonathan Bernier is on the Canadian roster. However, he has yet to see any game action.

In other news from the tournament, Slovakia – featuring the Kings Michal Handzus – also advanced to the Qualification Round and their next game will be against Jaromir Jagr and the Czech Republic.

For a look back at some USA-Canada hockey news, check out these articles: