You are here: Home / history / Without Their Top Player, Kings Down Sharks in Game One 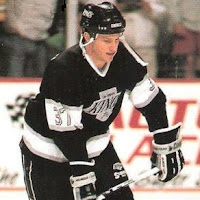 It’s not the player you’re thinking of. And it’s a different game one.

On October 16, 1991 the Los Angeles Kings were about to play host to the NHL’s newest team, the San Jose Sharks.

Shortly after the morning skate early that day, Wayne Gretzky received a phone call that his father was in the hospital after experiencing complications related to a brain aneurysm.

Then-owner Bruce McNall rushed the Great One home to Canada on a private jet to be by the side of his 53 year old father, Walter.

On the ice, coach Tom Webster had some shuffling to do. Obviously, when you’re without your number one center, it wreaks havoc to your entire line-up.

Webster put Tony Granato up front, between Mike Donnelly and Jari Kurri. Luc Robitaille and Dave Taylor now had John McIntyre as their center on the second line. And Bob Kudelski centered a line featuring Tomas Sandstrom and Ilkka Sinisalo at wing.

But, those were the good ol’ Smythe Division days when goals game in bunches.

The Kings matched their five with goals from Peter Ahola, Donnelly, Randy Gilhen and a pair from Luc Robitaille. However, the star of the night was that center playing with Sandstrom and Sinisalo…Kudelski scored a hat trick, giving the Kings an 8-5 victory in the first-ever game played between the two teams.

Just like that fateful night in 1991 though, the Kings are again without their top center.

History was made that first night. Can the Kings do it again?

– Even though there were 13 total goals scored in that first game, Robitaille had the only power play goal of the night. Yes, twelve (!) even strength goals.

– Gretzky returned to the Kings once his father’s condition stabilized (and ultimately improved). When the Sharks came back to the Forum on November 23, 1991 for their second game in LA, Gretzky greeted them with a hat trick of his own.

– The following year was one of the craziest Kings-Sharks games ever, when Robitaille, Kurri and Donnelly each picked up a hat trick. Their nine goals were part of an 11-4 win for the Kings, the most LA has ever scored against San Jose. It’s also the only time in Kings history three LA players have had hat tricks in the same game.