You are here: Home / comments / Smyth’s been here before with a few of these guys 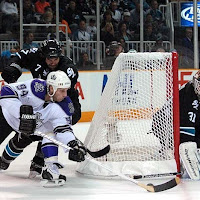 Last hour, Willie Mitchell shared his experience of being down 3-1 in two different playoff series back in 2003.

Well, at least four other Kings players have been there as well – and it was all in the same series, the 2006 Stanley Cup Finals between Carolina and Edmonton.

The Hurricanes had jumped out to a 3-1 lead in the series before Ryan Smyth, Jarret Stoll, Matt Greene and the rest of the Oilers rattled off two straight wins.

Is that something Smyth can use to draw upon right now?

“Yeah. We were down in the Stanley Cup Finals. We came back and pushed it to seven and lost in game seven. Obviously, it’s a sense of urgency on our part now,” Smyth said, referring to the Kings. “It’s a sense of ‘one game at a time’ and not looking past game five. We need to just stay focused.”

His Oilers were able to do just that, before ultimately falling in that final game.

It was close though. Trailing 2-1 in the final minutes of game seven, they pulled their goalie for an extra attacker.

Unfortunately, the play went back the other way.

With the puck on his stick, Justin Williams fired it into an empty net – securing the win for Carolina.

Obviously, Smyth is hoping to once again help his team dig themselves out of a 3-1 hole. Only this time, he’d like to come out on the winning end.