You are here: Home / comments / Ryan Smyth Looking for Help From Seventh Attacker 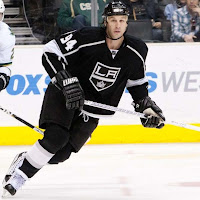 Ryan Smyth had already played in 87 NHL playoff games, spanning 10 different trips to the post-season, before the Kings and Sharks met up on Thursday night.

Although that gives him the advantage of experience, each new series brings its own story lines, challenges and surprises.

After practice today, he spoke about a few of the elements surrounding the first two games in San Jose and looked ahead to tomorrow night’s game three…

MM: You picked up an assist on Drew Doughty‘s power play goal Saturday night.  Has there been any reason for the power play to have suddenly taken off after so many struggles during the regular season?

RS: We’re getting pucks to the net and we’re getting them trough. Obviously, we’re getting bodies there too, so that helps. I think good puck movement and good player movement helps all of that, for sure.

MM: Thoughts on the play of Jonathan Quick so far…

RS: He’s been spectacular in the series so far and given us a chance to win on a nightly basis. I think goaltending is huge in the playoffs and he’s rising to the occasion. It’s great to see too.

MM: Can you share anything you said to some of the kids – like Kyle Clifford, Trevor Lewis, etc. – entering that first game there in San Jose?

RS: Just to seize the moment, seize the opportunity, enjoy it. It’s loud, it’s exciting and there’s a lot of adrenaline. So, capture it. Try not to ride the highs (of the game) or the lowest of lows. Try to stay even keeled and enjoy it.

MM: What type of flow are you expecting in the game tomorrow, especially in the first period?

RS: I’m sure they’re going to try and get the fans out of it early and prevent us from doing what they did in game one, get fans into it – 28 seconds into the game they scored. So, it’s important that we utilize our seventh attacker, the fans, and get the energy of the building helping push us.

Smyth, who scored in back-to-back games the final weekend of the regular season, is still looking for his first goal in the series with San Jose.  Through two games, he’s picked up an assist in each game.

Tomorrow night he’ll be back with his semi-regular center, Jarret Stoll.  Perhaps they can rekindle some of that magic they had together back in the first half of the season, when Smyth posted fourteen goals and nine assists before New Year’s Eve.