You are here: Home / comments / Ryan Smyth is playing ‘off the stat sheets’ 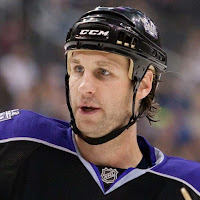 Ryan Smyth has done just about everything the Kings have ever asked of him.

Through it all, he’s been pretty consistent – except for one thing.

This season, he played in all 82 regular season games – the first time he’s done that since 2003-04 with the Oilers.

And even though the goals didn’t come as often as normal in the second half, he still finished with 23 goals on the season – third most on the team, trailing only Dustin Brown and Anze Kopitar.

After practice yesterday, when talking about the play where Brown goaded Ryane Clowe into taking a penalty on Saturday night, coach Terry Murray reminded everybody that Smyth also does stuff that never shows up in the box score…

“That’s a big play (the Clowe penalty). Those critical moments in a game pop-up and to identify and do the right thing at that time is what it’s all about to win in the playoffs. There’s another play I remember, where Ryan Smyth comes back, as hard as I have seen him come back on the back check tracking, makes a diving play to knock the puck off the stick (of Sharks’ winger Jason Demers). Those are not stat sheet numbers. There’s no way of really evaluating it at all. That’s just digging in to win.”

Which is something – even at age 35 – Smyth, obviously, still craves to do.

Smyth has been here before, with a few of these same guys