You are here: Home / comments / Rob Scuderi on Expectations and Being Extra Special 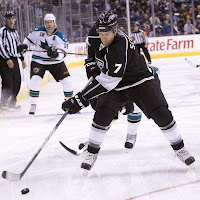 Yesterday, Ryan Smyth shared some of his thoughts here, specifically about what to expect in game three tonight and any advice he’s offered to some of the younger players on the team.

As another veteran presence in the Kings locker room, I asked the same basic questions to defenseman Rob Scuderi…

MM: What do you expect the tempo to be in the first period tonight?

RS: I think the tempo should probably pick up like game one of the series up in San Jose – except we’re the home team. You get that little extra jump in your step to play in front of your home fans and to have a good start. I’m hoping that we’ll be the ones who have the big start, a lot of shots on net and a lot of offensive time. Hopefully, we can carry some momentum off of that into the rest of the game.

MM: The Kings have several rookies playing in the post-season. What advice were you able to offer some of the kids, like Alec Martinez?

RS: Just to play the game. There’s a little more riding on each shift and to just take each shift at a time. That’s true in the regular season, but it’s amplified in the playoffs. Sometimes people feel ‘Well, we’re in the playoffs, I have to be extra special.’ But, you just have to elevate your game to the way the playoffs need to be played. It is a step up and as long as you elevate your game, but the same game, to the playoff level, that’s all we expect from you. And I think he’s done a great job so far.