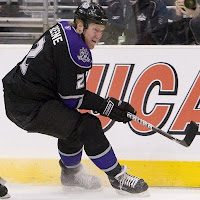 Prior to the series with San Jose starting last week, most felt the Kings strength was their defense and the offense was going to need all the help it could get.

Well, for the most part, things have played out the exact opposite.

Through four games, the team has scored 14 goals, an average of 3.5 goals per game – significantly above the 2.67 they averaged during the regular season.

To put it in perspective, Vancouver – who scored more goals than any other team in the regular season – averaged 3.2 goals per game.

However, the Kings find themselves down 3-1 in the series because they just can’t seem to keep the puck out of their own net. And it’s been because of the players in front of the net, not the guy standing in it.

Even so, defenseman Matt Greene thinks the series is far from over…

MM: The guys were full of confidence coming into the series. Where are you drawing inspiration from at this point?

MG: Pride. I think you just have to go out and win – that’s it. We still have an opportunity to come back. It’s a big game right now for us (tomorrow night). If we get a win out there, we come back and get another win at home and then see what happens in game seven. So, that’s it. We’re not out of this one bit.

MM: Who was the stand-up guy in the room last night, who was the most upset or saying the most about what happened in the game?

MG: I think everybody. Everybody was pretty emotional about what was going on – going into the second period, getting us back in the game, then losing right there. Terry (Murray) came in and talked to us and he doesn’t get fired up too often. So, when he does, that means a lot. At the same time, at this level right now, you don’t need anybody cheerleading you. You don’t need anybody giving you the rah, rah. You just have to do it, you just have to find it within yourself to do it. And I think everybody can.

The Mayor vs. Matt Greene
.
.
photo courtesy of Michael Zampelli