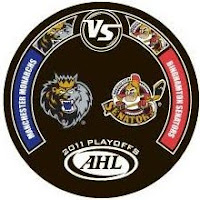 Last night the Manchester Monarchs opened their 2011 AHL Playoff run with a 2-1 win over the Binghamton Senators.

Prior to the series starting, several Monarchs made there way to MayorsManor – including defenseman Thomas Hickey, forward Bud Holloway and goalie Martin Jones.

Below are a few additional comments from afar. First, former Monarchs defenseman Alec Martinez, then Ontario Reign coach Karl Taylor, followed by an update on when to expect Brayden Schenn in a Monarchs uniform this post-season.

Martinez on staying in touch – “I talk to a few of the guys pretty consistently. I talk to (Jeff) Zatkoff a lot.  He and I were roommates in college and played together growing up. We go way back and have known each other for a long time. So, we chat a lot. Plus, the guys I lived with – like Mullen and Hickey and Kolomatis.”

MM: I hear Hickey is quite the prankster. Did he pull any good ones on you?

AM: Actually, I don’t think it was meant to happen, but they somehow weaseled their way into using my credit card to pay for the heating oil in Manchester. Luckily, I looked at my statement and saw a pretty good chunk of change charged there. I know that wasn’t on purpose. I guess it could have turned out to be a good prank. But, I caught ’em on that and they mailed me a check. So, it’s fine now. I think everyone had a little bit of that prankster in them and when you live with five guys, that’s stuff bound to happen. We had a lot of fun when I was down there.

[note: Martin Jones had been staying in a hotel when first arrived in Manchester. Then, after Martinez was called up to LA, he took Alec’s room and now lives with his competition, goalie Jeff Zatkoff]

Ontario Reign coach Karl Taylor on his former player, Bud Holloway (who led the Monarchs with 28 goals during the regular season)…

“Bud’s a very special individual, special kid. That first year he was here we had the most serious team in the world – guys wouldn’t smile, they wouldn’t laugh. I had to tell jokes in the room, if you can imagine that. Bud came down and he’s a great kid and a free spirit, a heck of a hockey player. I really believe in Bud. He loves to play the game and I believe he has a chance.”

MM: When you saw him at Kings camp back in October, was there anything different you saw – after all, it’s been two years since he was in Ontario…

KT: Well, he’s more mature. He’s a bigger guy. Now, he’s not a peripheral guy or he’s not a gut that’s a secondary scorer. He’s got to score, that’s his role now. He’s done very well with it. He led the team in scoring, playing very well and he’s pushing the Kings to try and get a call up. For his sake, I hope it happens.

And now, for what you really want to know…

Brayden Schenn is not expected to be in the line-up tonight when the Monarchs play game two vs. the Senators at 7pm EST.  In fact, word is, he’s not even in New Hampshire at the moment.

Game three is scheduled for Sunday afternoon in Binghamton. So, he has plenty of time to get there by then.