You are here: Home / comments / Los Angeles Kings Players are Quick to Praise 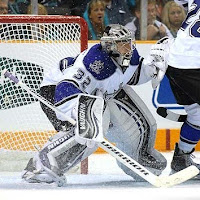 While much has been made of the Kings power play success in the first playoff two games with San Jose – and rightfully so, considering the regular season numbers – the play of Jonathan Quick shouldn’t (and hasn’t) gone unnoticed.

After a variety of reasons were given for his poor play down the stretch last year, including fatigue, Quick has looked nothing short of incredible so far this post season. Outside of the first minute of game one, he’s been as sharp as anybody could possibly hope for.

And his teammates have been quick to praise him…

Alexei Ponikarovsky – “He’s come up big with huge saves at key times of the game. He’s a great goalie. We’re trying to block some shots for him, to make his life a little bit easier. But, he’s playing great.”

Rob Scuderi – “He’s not surprising anyone in here (the locker room). He’s been a great goaltender for us all season. We don’t expect anything less. He’s going to have to be our best player in the playoffs if we’re going to have a chance to win some games and possibly win a round or two, and hopefully more. He has not disappointed.”

Jarret Stoll – “He’s just so steady and so calm. With his positional play he’s just been in the right spot. You don’t see him over committing. He doesn’t have to work too hard in there it seems like. Obviously, he is working hard, but you don’t notice him trying to do too much. He’s just there. He’s covering rebounds. He’s battling for pucks that he can’t see. He’s making those big saves too when he has to.”

Brad Richardson – “He was obviously great last game, with the shutout. But, in the first game he made some huge saves to keep that game close. He’s our number one goalie for a reason. He’s just played awesome. In my opinion, he’s one of the top three goaltenders in the league. So, he’s great to have back there. We have a lot of confidence in him.”

Quick will be back in net again tonight for game three at Staples Center.