You are here: Home / hockey / LA Kings Prospect Report – Sweeping Through the Playoffs 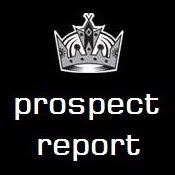 Things are moving right along in the junior hockey playoffs.

And if there is a theme so far, this may be the year of the sweep.

Among the Kings prospects participating in post-season play either in the WHL, OHL or QMJHL, there were three series that ended in sweeps during the first round – followed by three more that just took place in the second round.

First out was Tyler Toffoli, who was then signed in Manchester (AHL). He was followed by Brayden Schenn after the Saskatoon Blades were – surprisingly – swept out of the second round.

(More on them later today in the Monarchs report)

On the flip side, Maxim Kitsyn and the Mississauga St. Michael’s Majors completed their second consecutive series sweep and have advanced to the Eastern Conference Championships, where they’ll play the Niagara Ice Dogs starting tomorrow night.

In a note unrelated to the Kings prospects, yet still with ties to the team’s history… don’t look now – Warren Rychel‘s Windsor Spitfires are playing in the Western Conference Finals and they’re looking to move on to the OHL Championship for the third year in a row. That would be quite the accomplishment, especially considering their best defenseman (Cam Fowler) ended up staying in Anaheim this season.

Over in the QMJHL, one Kings prospect moved on and another went home this weekend. Goalie JF Berube‘s playoff run with the Montreal Juniors is over after they lost their series to Lewiston 4-2. Meanwhile, defenseman Nic Deslauriers and the Gatineau Olympiques are on to the third round after taking out Drummondville in six games. He had two goals, three assists and was a plus-8 in the series.

Finally, Linden Vey – the WHL’s regular season scoring champion – continues to put up points in the playoffs. He’s leading the post-season scoring race with 21 points (10 goals, 11 assists) and his Medicine Hat Tigers will begin play in the Eastern Conference Finals this Friday.

So, as the third round gets underway this week, the Kings still have one player left in the WHL (Vey), OHL (Kitsyn) and QMJHL (Deslauriers) playoffs.