You are here: Home / hockey / Kings vs Sharks – What Could Happen, Has Happened 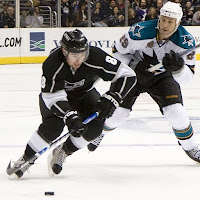 Some credit card commercial says there’s a one-in-18 chance of a hat trick being scored in an NHL game.

So, that’s something that could happen.

However, here are a few of the more likely stories to watch for tonight (and some other loosely connected tidbits)…

* Should the Kings win, they’re officially in the playoffs. Also of note – if the Kings can earn four points in their final four games, they’re guaranteed to finish higher than Anaheim.

* Ryan Smyth‘s first goal as a member of the Kings came against the Sharks on October 6, 2009.  Since then, he’s scored three more in another nine games between the two teams.

* Prior to the Sharks visiting Staples Center on New Year’s Day, Thornton stopped by MayorsManor to talk about the match-up, taking over the ‘C’ from Rob Blake, playing Drew Doughty and more (article here).

* Dustin Penner has been put on notice. Kings coach Terry Murray has essentially called him out twice in the last few days, including saying he needed more from the big left wing – not in terms of points, but overall work ethic. His 20 points (11 goals, 9 assists) vs. the Sharks are the most he has against any NHL opponent.

* That same game also marked the first time Jarret Stoll and Matt Greene played for the Kings, after being acquired earlier that summer in a deal with Edmonton.  Stoll’s 12 points in 30 career games vs. the Sharks are his least amount vs. any Pacific Division foe.

* Jonathan Quick will be in goal for the Kings. His lifetime record vs. the Sharks is 6-2-1, including 3-1 this season.

Tonight’s action gets underway at 7:00pm PST…and take note, the game will be on Versus.

Paining by Numbers with Ryan Smyth – he looks back at his 1,000 games in the NHL