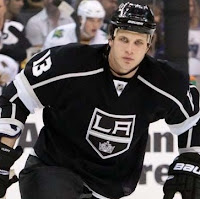 Fresh off of being singled out as the Kings Rookie of the Year by coach Terry Murray and captain Dustin Brown, Kyle Clifford is just hours away from making his NHL Playoff debut.

Is he ready to go and what does he think about the series with the Sharks?

MM: How are you feeling right now?

KC:  I feel as ready as ever. This is my first one, first professional playoffs here in the NHL. It’s a big stage. You work your whole life for this. When you’re a kid, all you think about is the Stanley Cup. So, I’m really looking forward to it.

MM: In your opinion, what’s the biggest strength of the Kings team right now?

KC: Our character. We’ve had our ups and downs all year. When we went through our couple of tough stretches there, we really came together as a group and learned how to deal with that adversity. I believe in this room we have a lot of guys that have a lot of heart for the game.

MM: If you had to pick one concern heading into the series, what would it be?

KC: I’m not too concerned right now. Like most of the guys here, we just want to get out there and play – just do what we do out there.

MM: With the team looking to generate offense any way possible, how important is it for your line to help contribute?

KC: There’s nothing wrong with greasy goals. We have some high skilled guys on our team too. The playoffs are going to be tight, winning games 2-1. So, you really have to dig down. When you get your chance, just tap it in. It may not be pretty, but a goal’s a goal, right?

More pre-game notes to come throughout the day.

Drew Doughty on the Sharks – His Memories and Concerns

Dustin Brown Selects his Kings Rookie of the Year

Coach Terry Murray Selects his Kings Rookie of the Year