You are here: Home / comments / Kings-Sharks Game One: High / Low with Jim Fox 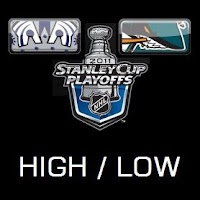 Over the last few seasons Jim Fox has stopped by MayorsManor a number of times to share his highs and lows from select games.

Like last year during the Kings round one playoff series with Vancouver, LA’s award winning commentator is back again today for some more post-season analysis.

* Just three shots on goal in the first period – it happened a few times in the regular season too, not the way you want to start a playoff series

* Defensive zone coverage on the first goal against – a few things broke down, but the biggest issue was leaving the ‘home plate’ area with the opening right down the middle of the ice

* Repeating one of the themes from game one last season vs. Vancouver – winning the special teams battle, getting as many saves by Jonathan Quick as they did (42) and still losing the game

* Big ‘bounce back’ – the team was able to bounce back after such a slow start, to the point where they controlled portions of the game with a tenacious forecheck

* Winning the special teams battle – the Kings’ penalty kill did it’s job, the team was disciplined by only allowing two power plays against and the power play goal by Dustin Brown was a bonus for a power play that struggled all year

* By far the biggest high, Justin Williams – guts, skill, guts, energy, guts…he was everything the Kings hoped for and more

He’ll be back with his high/lows from that game also.  So, be on the look out for it, probably Sunday morning.

Now…if we could just get him to respond to what Kerry Fraser had to say about his hair. Hmmm…

Without Their Top Player, Kings Down Sharks in Game One

Kings vs Sharks Playoff Series Preview – who will win and why

Drew Doughty on the Sharks – His Memories and Concerns