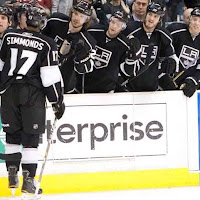 They also share a bit of history with Matt Greene and Jarret Stoll. All four played their first game as a member of the Kings together. It was October 2008, at Staples Center, versus San Jose.

Tonight, they’ll face off with the teal and black again, as the Kings and Sharks square off in their first ever playoff series.

MM: What do you remember about that first game?

WS: It was kind of nerve racking, obviously. It was my first game in the NHL and I didn’t really know what to expect. When you’re playing against Joe Thornton, Dany Heatley, Patrick Marleau, guys like that, who I’ve watched my whole life growing up, it’s – for me to my to play my first game in that situation, it was huge. But, that’s behind me. This is my second playoffs. So, I’m just excited and ready to get started.

MM: What do you see as the Kings biggest strength going into the series?

WS: I think we just need to stick to our structure. We’re a structure oriented team. I think if everyone takes care of what they have to do and we believe in each other, we’ll succeed.

WS: I don’t really know. It’s more about us. If we’re on our game, I know we’ll be successful. Sometimes, when we get beat, we beat ourselves. That’s the thing, especially against the Sharks – they’re a highly offensive team and we can beat ourselves, we can’t make little mistakes in the middle of the ice. We just have to make sure we’re getting pucks deep and focus on that.

MM: One of your former junior hockey GMs basically said you were born for playoff hockey. Would you agree?

WS: Yeah, definitely. It’s kinda my style of game – crash and bang, it’s hard nose. You just take pucks to the net and you just go, you battle in the trenches. That’s what I love to do. That’s my style of play and I’ve always played like that my whole life.

Well, he’s about to enter the series of his life later tonight. For the Kings to win, they’ll need to battle like they’ve never battled before. Or at least not in quite some time.

Check out the sale going on at the NHL Shop: