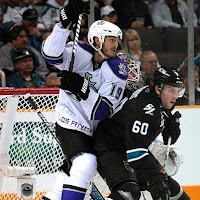 In Tuesday’s game with San Jose, he added another assist – helping out on Willie Mitchell‘s goal, to put the Kings up 1-0 just a few minutes into the first period.

Earlier in the series he came oh-so-close to netting his first NHL goal.

Even more impressive, he’s had several quality shifts – even late in games. Not exactly something fans were used to prior to the post-season.

MM: You seem to be a different player in this series – almost like version 2.0, if you will. Do you feel you’re playing any different?

KW: Clearly the season’s been a long road and there’s been a lot of development taking place. It’s my rookie year, so it’s getting used to the ins and outs of the game. I think coach had gotten me a few more minutes at various times of the season and more towards the end, there were some opportunities there where I felt I could play a little more. Hopefully I was contributing when I was playing and even at other times when it was outside the whistles. I’m definitely excited though and it’s been a great experience thus far. It’s great to be able to help out and bring something to the team. If I feel like I’m doing that, it makes everything easier – my confidence gets higher and to have other guy’s confidence in me, that’s a positive upward spiral, I suppose.

MM: You’ve had a couple of good looks at a goal so far…

KW: The real one I wanted to go in there was in OT in game one. That would have been real nice. (Dustin) Penner came out from behind the net and found me kind of lost there in the slot. I got it through the d-man, but didn’t quite get it through the ‘tender. Next time we’ll look for that one.

MM: Plus, you still have that bet with Clifford hanging over your head.

KW: Yeah, he got pretty darn close in game two. So, I was a little worried. In any case, it would be worth how ever much money that dinner would cost me. That kid can eat a lot. I’ve seen him down a 48-ounce steak.

Kyle Clifford, who has two goals in the series, has picked up the only fight for the Kings so far (late in the first period of game one vs. Ben Eager).

With the Kings looking to impose their will on the Sharks tonight in game four, there’s at least a good chance Clifford and/or Westgarth could add another scrap or two to the series.

Or will they show off their offensive talents instead?

Westgarth on Fight Rules, Clifford’s KO and his scrap with Cam