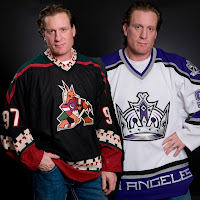 “You could argue about who the greatest American-born hockey player was, but you’re not going to get into any debate without J.R.’s name getting mentioned,” Brian Burke at the 2010 U.S. Hockey Hall of Fame Gala.

Jeremy Roenick was inducted that night, a recognition for the stamp he put on the game of hockey as a two-time Olympian, seven-time 30-goal-scorer and nine-time NHL All-Star.

Over the course of his 20-year NHL career he played nine seasons in the Pacific Division, including one year in Los Angeles and two stops in Phoenix.

He’s always fun to talk hockey with and he was kind enough to make a return visit to MayorsManor for a preview of tonight’s critical Kings-Coyotes match-up, mixed in with some highlights and memories too…

MM: Looking back over your career, what was your favorite game against the Kings?

JR: It would most definitely be playing in the old Forum, for sure. I just loved playing in that building and playing against Gretzky there. One of most memorable games against the Kings would be when I hit Marty McSorley right in front of the bench, really hard, and I stood there and looked at him. It was my early lesson in the NHL that you don’t stand over somebody that you just hit, especially with a tough guy like Marty McSorley. He got up and grabbed me, we fought and he hit me so hard in the forehead that I went blind for about two seconds – I couldn’t see a thing.

MM: How about your favorite game against the Coyotes?

JR: Well, it’s probably when I scored my 500th goal. Even though it was an ugly goal, it still was memorable because I was scoring my 500th against a team I played for, really admired and loved. So, that’s probably the game I remember the most.

MM: The roster in LA has almost completely turned over since you played with the Kings. So, if you had to pick just one of the “new” guys on the team who you could have played with, who would it be and why?

JR: I would have loved to play with (Anze) Kopitar. He’s one of those guys that I just think ‘he’s fantastic.’ He makes his teammates better. He was in the minors when I was there, so I didn’t really get to play with him at all. He’s just such a great kid and such a dynamic, fantastic hockey player.

[note: Kopitar actually went back to Sweden to play hockey for the 2005-06 season, after Roenick would have met him during the Kings training camp at the beginning of that year]

MM: From what you’ve seen, what do you like about the Coyotes team this season?

JR: Number one, most impressive, is their goaltender. Unfortunately, he doesn’t get the publicity or the press as much as he should. Yet, he’s one of the best goaltenders in the league and is one of those goaltenders that can win a series or win a game by himself. Ilya Bryzgalov is definitely one of the guys who should be looked at for the Vezina Trophy.  I also love their coach. I think (Dave) Tippett is a mastermind at getting his team to play a certain way and having a system that works within the structure of their roster. They don’t have any superstars, but play such a team game – they’re committed to the system and work that system (perfectly), pretty much every night. That’s why their successful.

MM: On the flip side, if you had to hone in on one thing, what do you not like about the team this year?

JR: What I don’t like about the team is they don’t have enough support from the fans. But, they can’t figure out their ownership issue. On the ice, there really isn’t much to say bad about the Coyotes. I think their defense is strong, they have pretty good goal scorers – they don’t have great goal scorers, but defensively they’re very, very strong. And (Keith) Yandle is definitely going to be up for the Norris Trophy this year. So, you have to give him props.

MM: Same question on the Kings, what do you like about them right now?

JR: I like their energy. They have really good energy. I think they’re very deep, in terms of their roster. Even having (Justin) Williams and Kopitar go out, they’ve still managed to play pretty good hockey. I love their defense. They have a very strong defense and the fact that they have two goaltenders they can play every night in (Jonathans) Quick and Bernier, both are very strong. So, I like the depth and they have good secondary scoring and they play very well as a team.

MM: Is there anything you don’t like about the Kings?

JR: Probably their (physical) toughness. I think they play hard, but their toughness is probably the one thing they can get better at.

MM: You mentioned liking the netminders for both clubs. Yet, if you had to pick, which team’s goaltending do you have more faith in – LA or Phoenix?

JR: In terms of one goaltender, one on one, I’d have to go Bryzgalov. But, in terms of tandems, LA has probably one of the best goalie tandems in all of hockey.

MM: How about on the captains, Dustin Brown and Shane Doan – who’s the better captain?

JR: They’re almost mirror images of each other. Both are very humble, both are very quiet, both are very passionate, tough, physical, goal scorers. I think this is an identical tie. Shane Doan might be just a little bit better looking.

MM: Given how complimentary you just were towards both players, why is it that Doan gets so much respect around the league while some pockets of fans still question Brown as the leader of the Kings?

JR: Oh man, I’ve never heard that. But, if I heard that, I’d go nuts. I think Dustin Brown epitomizes what a captain should be. He’s strong, he plays hard, he’ll speak when he needs to speak. He’s kind of like the Jonathan Toews quiet, you know. He goes about his business and leads by example. When a big game needs to happen, he has one.

MM: The Kings and Coyotes are meeting tonight and they could meet in the playoffs starting next week. However, because the regular season and post-season can be two different animals, is there anything to be learned from this game about the way they match-up?

JR: Playing a team that you might be playing in the playoffs, it’s really good to have that mental edge on them. Whoever wins those last couple games has that little mental edge over the other team. You have more confidence going into the games because you know you can beat them, you have beat them. So, I think it’s a mental thing with a lot of teams in these last couple games – just establishing some dominance.

MM: So, without knowing who will win tonight and gain that mental edge – if these two teams meet up in the first round, who wins that series and why?

JR: It will go seven games and I think the only reason why the Coyotes will win is because of home ice advantage. They’re spitting images of each other, talent wise. They’re very, very close grit-wise, in their compete level and goaltending. I just think the home ice advantage is the only difference between those two teams.

MM: So, what if the points fall the other way then – what if the Kings end up with home ice in the first round, do they win?

Tonight may turn out to be a preview of that possible playoff series.

And if J.R. is right, the Kings should come out the victor this time around, as the final regular season game between the two teams will be played on Staples Center ice.

A win would also officially punch LA’s ticket to the playoffs and could give them that mental edge he spoke about heading into the post-season.

Westgarth and Clifford Preparing to Get (Biz) Nasty?  – big talk from both sides