You are here: Home / hockey / Jarret Stoll Gets Physical with the Dallas Stars 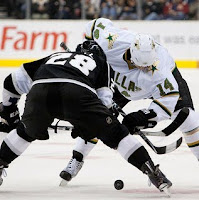 Things aren’t always as they appear.

Prior to the season staring, a number of guests stopped by MayorsManor to weigh-in with their thoughts on the coming 82 games.

During one such conversation with John Buccigross of ESPN, he said “This doesn’t seem like a team that is expected to go anywhere,” when talking about the Dallas Stars.

They led the Pacific Division for most of the season.

Statistically speaking, if Jarret Stoll is on your team, you’re counting on him to score some timely goals, win a lot of face-offs and flat destroy the other team’s goalie in a shootout. But, lead the team in hits?

Yes, he’s third on the Kings this season – albeit, it’s a distant third.

Entering play this afternoon, the usual suspects are at the top of the board, Dustin Brown with 280 hits and Matt Greene with 225 hits.  Then, it’s Stoll with 151.

However, his top target has been the Dallas Stars.  He has 22 hits against them this year and more hits vs. the Stars than any other team in his career.

MM: Your hit counts are almost always up against the Stars.  But, what got into you the last time the two teams met up (in Dallas on March 13) – you led the Kings in hits that night…

JS: Ah, I don’t know. I try to finish my checks whenever I can. I don’t even know how many I had.

MM: You had seven.

JS: Well, I think I have a fair amount of hits among the forwards on our team. I don’t know. I just try to finish my checks as much as I can. Maybe the stats guy messed up a couple.

MM: So, it was nothing personal against the Stars and/or you don’t plan on breaking that record in the game (this afternoon)?

JS: No, no. I don’t even think that’s a record for me. But, no. It has to be physical if there’s a chance to hit a guy. Obviously, I was in some of those situations during that game. So, it is what it is – just being physical.

His last goal against them at Staples Center was all the way back in November 2008.

The Kings won both of those games.

Another goal today would give him 20 for the season and possibly go a long way towards another victory over the Stars.

Stoll on His Fight With Dustin Penner