You are here: Home / comments / Is opportunity knocking on Trevor Lewis’ door? 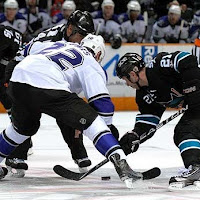 Rookie or not, Trevor Lewis has been a valuable piece of the Kings arsenal this season.

Used mostly as a defensive forward, he’s occasionally moved up to a higher profile line and did so again in game two (when Jarret Stoll was out).

During the regular season he averaged 11:29 of ice time per game – and has seen that number increase to 15:48 through the first four games of the playoffs.  Even more impressive has been his plus-minus rating. For the 82-game regular season he was minus-11. However, he’s been an ‘even’ player in the post-season.

MM: On a personal level, how are you feeling about your game so far vs. the Sharks?

TL: I think my game’s alright. But, right now it’s about the team game. It’s must win now for us to keep the season going. We have to come in play it like we know we can and win game five.

MM: Being down 3-1 in the series, where do you draw inspiration from at this point?

TL: We’ve shown we can play and beat these guys. We’ve played some good hockey against them. We’ve just had a few breakdowns, or I don’t know, lapses, I don’t know what it is. We just have to get back to playing a full 60 minutes and then we can beat these guys.

MM: You’re a quiet guy and you’re a rookie, so nobody is expecting you to stand up and take charge in the room. But, a lot of guys were upset after the other night. Who was leading the charge verbally in the meeting after the game?

TL: I think pretty much everyone kind of chimed in. We look up to our leadership group and some of those guys help us a lot – especially us young guys. It’s just time though for everybody to step up and show how they can play.

Early last month, when talking about Lewis, coach Terry Murray said “He’s settling into the NHL game and I feel down the road he can put some points on the board. Once his hands catch up with his feet I think he’ll be more relaxed in those opportunities and he’ll find a way to score.”

What’s that old expression – there’s no better time than now?

Coach Murray selects his Rookie of the Year