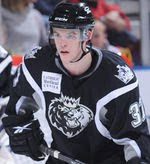 When Kings GM Dean Lombardi was hired in April 2006 the NHL Draft was right around the corner and a year’s worth of prep had already gone into the team’s ranking of players. So, it was only natural that he let the scouting staff do most of the heavy lifting come draft day.

One year later, he was in full control.

And it was at that 2007 Draft where he made one of his most controversial decisions – even to this day. With the fourth pick in the first round he selected defenseman Thomas Hickey from the WHL’s Seattle Thunderbirds.

It was a confusing moment for many.  Hickey wasn’t projected to be taken in the first 15-20 picks and he went in the top five?

Being a first rounder comes with a heavy enough burden, so this was likely to magnify an already tough situation. Yet, the following season he went on to win his second gold medal with Team Canada at the World Junior Championships and after finishing his junior season joined the Monarchs.

His professional debut with the Manchester may have come on April 1, 2009 – but, Thomas Hickey is no joke.

After some stops and starts over the last few years due to injuries, he’s played in 76 of the Monarchs 78 games this season and remains one of the Kings top defensive prospects.

As they head into the final weekend of the AHL’s regular season, I had an in-depth conversation with Hickey on how things are going out east…

MM:  Recently, Kings Assistant GM Ron Hextall said this is the first year the coaches there have trusted you in all situations and it appears that you’re learning to play without carrying the burden of being such a high draft pick. Is that a fair assessment?

TH: Yeah. I think it’s something I struggled with early on, when I first got drafted. You go back to junior (hockey) and you think you have to be lighting up the world every night. Even coming here, sometimes as a young guy you try to do too much. I’ve really worked on my game and I’ve worked with Mike O’Connell, who works in development. He really breaks things down and makes things a lot simpler. You get a better understanding of the game and what your strengths are. So, for me, all the positioning stuff I learned from him is huge. As far as that other stuff goes, I’m just trying to be the best player I can be and trying to help my team win. I’m not really concerned about the external pressures that come with what’s gone on so far.

MM: Another one of the Kings first round draft picks was recently dealt to Edmonton.  Talk about the trade of fellow defenseman Colten Teubert and what you were thinking at the time.

TH: It was pretty neat seeing it all unfold. Being a prospect, you usually don’t get to play with a guy that’s been traded in that kind of a deal. But, I was actually watching TSN with a few of my roommates when it happened and a silence came over the room. You don’t know really know what to think at all. And then we saw him later than night as he was packing up all of his things. It’s pretty crazy how it all works. He was in another city the next day. So, it was definitely different, but we’re happy for him and he’s doing well in Oklahoma City. It’s just part of the business.

MM: Were there any nerves on your end that you might be moving in a deal, knowing the Kings were most likely trading prospects to get NHL scoring help?

TH: A little bit. I wouldn’t necessarily call it nerves though. It’s an exciting day for the organization as a whole and you don’t know what’s going to happen. But, if you’re involved in it, it’s probably not a bad thing because you’re going where someone else wants you and if they hold onto you, that means the team you’re with wants to keep you. So, it’s just an exciting day. But, yes, I definitely thought about it more this year than I had in other years.

MM:  Update us on some of the other blueliners there.  What have you seen from Viatcheslav Voynov this season?
TH: He’s been great and he’s a much different player than he was last season. He was hurt to start the year and then coming in his game was just a lot better, a lot more sound. He has such a good shot that he’s a threat to score every time he’s on the ice. That really frees up his teammates or if he gets that time and space, he’ll take that shot. There have been huge improvements by him overall.

MM:  How about Jake Muzzin?  He was in LA for a while earlier this season.  But, how’s it going with the Monarchs?

TH: I lived with him a lot during the summer and got to know him. I think he’s been all that everybody was expecting from him. He’s a big body and when he really uses his size, and if gets mad out there, he’s a force. He’s a really good player and you can see his confidence on the ice. He can take control of the play too. So, he’s been really good for us.

MM:  What about in net – the Kings haven’t been known for exceptional goaltending, but that is starting to change.  There’s a solid tandem in LA with Bernier and Quick.  Pretty similar in Manchester now with Martin Jones and Jeff Zatkoff, right?

TH: I’ll have to be careful with what I say, I live with both of those guys. But, they’re both great people and are great guys to have back there. As a defenseman, you can tell that they appreciate everything that you do. Even on a simple play, you still get recognition from them and a pat on the butt. I’m really happy to see the way Zatts has been playing lately. The season didn’t start the way he wanted it to and it’s tough when you have a really good guy like Martin Jones pushing you. Zatts has found his game lately – he’s won us games and kept us in games. It’s been huge for him and Jonesy’s been great all year. He got that recognition he deserved when he went to the (AHL) All-Star Game. He’s just so big. He’s confident, but he’s a really humble guy. It’s nice to see as a rookie. He definitely goes out of his way to make it be known that he’s a first year guy and he’s trying to help out, when he could be strutting around if he wanted to. So, to have two goalies playing at the top of their game right now heading into the playoffs, that’s huge for us.

MM: Any good pranks between you and the roommates lately?

TH: We all park in the front driveway and you can’t really see around the side of the house. Recently, one of our roommates, Dave Kolomatis, wasn’t home. So, we took his car and parked it on the side. He had no idea where it was for quite a while and we had to keep a straight face the whole time. That was a pretty good one. When he found out he messed up our rooms pretty bad.

TH: I watch them a lot. Sometimes it’s tough with the late starts (due to the time change).  But, we all like to watch – especially having guys like Marty (Alec Martinez) up there. We want to see him doing well.  Either way though, you have to watch if you want to be ready to get the call, to know the style of play and know the guys you could potentially be playing with. But, I don’t think about a call-up. I think when you start doing that it won’t happen.

MM: Taking nothing away from Cliche – you were the captain in Seattle (WHL) and for Team Canada, so were you a little disappointed to not get the ‘C’ in Manchester this season?

TH: Not at all. Even if I was given the ‘C’, I think I would have told the coach the right guy to wear it is Marc-Andre Cliche. He’s a guy that our entire dressing room looks up to and the start of the year we were just waiting for him to be fully healthy, coming back from an injury he was dealing with. So, there’s no question in my mind that he’s the guy for the job. It’s really good for me that I can watch what he does too because he’s a great leader. He reminds me of Drew Bagnall, who we had last year. Realistically, this is pretty much my first season of pro hockey. So, it’s nice to sit back, watch and learn from other guys. He’s definitely a really big influence on everybody on our team. There wasn’t any animosity or hoping for other things. I was just honored to be an assistant captain.

TH: There’s probably been a stretch, when you get to about that 45-60 game range, and you just keep playing three games in four nights or four games in five nights – you’re like ‘wow, this is difficult.’ You have to bring it every single night. That’s been one of the learning points for me and you learn how to come to the rink and be ready every single night. As far as high points, that’s something we’re still looking forward to as a team.

Perhaps the best is yet to come for Hickey and the Monarchs, as the AHL Playoffs start next week.

Interview with Monarchs ‘Man of the Year’ – Bud Holloway

Two Minutes in the Box… with Andrei Loktionov