You are here: Home / AHL / Dustin Penner’s Special Relationship with the Dallas Stars 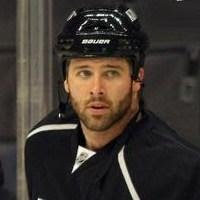 On November 23, 2005 the Kings were spending a day off in Nashville, caught between playing days on a brief two-game road trip.

Nearly 700 miles away a young left winger was about to suit up for his fourth different team in less than two years. More importantly, he was about to make his NHL debut against the Dallas Stars.

They say everything’s bigger in Texas, so how appropriate that 6-foot-4, 245-pound Dustin Penner played his first game with the Anaheim Mighty Ducks (which they still were back then) in Texas.

He had five shots, zero points and two penalty minutes (goaltender interference) in a 3-1 Ducks loss.

Over the next 418 regular season games he’s played the Stars 26 more times and picked up 16 points (nine goals, 7 assists).

Due to the circumstances of his season – read: being traded – this will be the seventh time he’s faced them in 2011, having played them four times with Edmonton and twice already with LA.

MM: You made your NHL debut against the Stars, so is it still special to play them or have they become just another team at this point?

DP: That was my first game. I flew up that day from Portland, Maine (AHL) – it was pretty exciting. I played about 15 minutes and 32 seconds, I think.

DP: I think I’m right on that, I don’t know why. My memory isn’t that good, but for some reason I have that number. So, yeah, I think it’s always special in a way, maybe subconsciously to play against Dallas.

MM: They’re a different team this year, in the sense that long-time stars Mike Modano and Marty Turco have moved on. What have you seen from them in the five games you’ve played them this year compared to last year’s team?

DP: I think their goaltending is really good. (Kari) Lehtonen has finally established himself. Obviously, they have a potent power play. I think (Brad) Richards is playing great. And I think they’ve had a lot of young guys, maybe, catch up to the NHL level. They were kinda green around the gills and now you have guys like Loui Ericksson and they had James Neal. They are a younger team, they play all four lines and they have really solid ‘D’ too. They’ve always played a really similar type of game, more defensive. But, they have the skill to put teams away now.

MM: You mentioned James Neal there. We’ve talked a lot about your situation at the trade deadline. But, were you surprised at all to see them trade Neal?

DP: Yeah, I was – just because of the type of player he was for them and how consistent he was. But, I guess they felt they needed a d-man like (Alex) Goligoski.

Penner’s last goal came against the Stars, back on March 13th in Dallas.

Assisting on the goal were Anze Kopitar and Justin Williams.

If he plans on making additional memories against the Stars this afternoon, he’ll need to find some new helpers.