You are here: Home / comments / Doughty on the Sharks – His Memories and Concerns 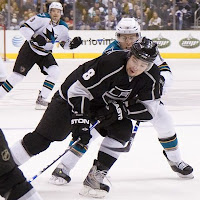 Long before Drew Doughty was a Norris Trophy finalist and one of the top defensemen in the league – OK wait, not that long before, more like a year earlier – he made his NHL debut against the Sharks.

Below he gives some thoughts about now playing them in the playoffs for the first time and shares what he likes – and is concerned about – heading into the series with San Jose.

But, first, let’s go back in time for a minute…

MM: What do you remember about that October 2008 game?

DD: To be honest, my memories of it aren’t the greatest. I remember going out for the third period and we had a power play. I felt I had played well for the first two periods. Obviously, I was a little shy, just because of the speed of the game and stuff like that – I wasn’t used to it yet. But, I remember walking out onto the ice for the power play and I told Simmer (Wayne Simmonds) that I had to do something because I felt like I was just out there, not doing much. He said ‘Don’t do it, man.’ I went down and I tried to make a move on the power play, I turned it over and they ended up coming back and scoring. So, that’s my memory of my first game, which isn’t the best one.

MM: Does he like to remind you that he told you so?

DD: I don’t even know if he remembers it. But, I remember it clearly because I was the one that messed up. So, I’ll always remember that.

MM: Moving ahead to this series, what’s the biggest strength of the Kings right now?

DD: Definitely, our defense. Our game plan and structure is defensive hockey. We have two really good goalies – really, really good – and we have a great defensive core, as well. All of our forwards can play good, defensive hockey too. Not that we don’t have any offense, I’m not saying that. But, we first have to play defensive hockey. That’s what playoff hockey is – play hard, play rough in the corners. As our opportunities come, we better jump on them and be capitalizing.

MM: If you had to pick one concern heading into the series, what would it be?

DD: I guess, I don’t think scoring is really a concern of mine because I know there are so many guys in this room that can put the puck in the net. But, that is probably our weakest point, our scoring, obviously. Yet, I think we’re going to be fine. We struggled throughout the season with putting pucks behind the other team’s goalie. We’ll be fine in the playoffs. We’re all going to step up. We all know that Kopi’s out. Willie (Justin Williams) will be back. So, we’re going to have that offensive power that we didn’t really have in the season. Playoffs are just such a different game. Everyone’s level steps up and I think we’re going to be fine.

MM: You sound pretty confident heading into the series…

DD: Yeah. We need to be, I think. Even though San Jose finished second and we were seventh, it’s not a big deal. Our season series was 3-3 for a reason. They’re a lot different team at home than they are on the road. So, I think if we can steal a couple of games on the road, we’ll come right back home and win every game there.

Game one is tonight.  We’ll have to see if the old adage is true – ‘Confidence breeds success.’

For a quick history lesson, read this article:  Without Their Top Player, Kings Down Sharks in Game One