You are here: Home / comments / Did Doughty and Johnson Improve This Season? 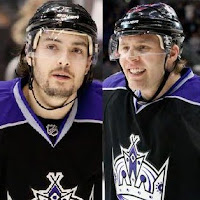 For the Kings to have a significant chance of beating the San Jose Sharks in the opening round of the playoffs they’ll most likely need to rely heavily on their goaltending and defensemen.

Four of the six blueliners were with the team for last year’s post-season appearance against the Vancouver Canucks. Willie Mitchell – a veteran of 45 NHL playoff games – and rookie Alec Martinez now round out the group.

Yet, nearly all of the attention will be on the Kings’ pair of high-profile defensemen, Drew Doughty and Jack Johnson.  Both had strong years last season for the Kings and represented their countries at the Winter Olympics.

But, what about this season? Doughty’s goals (16 to 11), assists (43 to 29) and point totals (59 to 40) all slipped from a year ago – when he was nominated for the Norris Trophy.   And Johnson saw his point total slightly increase (36 to 43) by adding more assists. However, he hasn’t scored a goal since February 2 in Edmonton.

Have they improved from a year ago?  Here’s what coach Terry Murray had to say…

“The area of improvement is on the checking part of the game. Our numbers, (compared to) the league, on shots against, goals against, the penalty kill, our checking game has improved again this year. They’re a big, big part of it. Those young guys play the most minutes on the back end for our team and are important players that can play in all of those situations. They’re point producers and I’ve seen, in the second half of the year, a big improvement in Doughty’s game. At the start of the year, I saw a big improvement with Jack Johnson’s game. He started off playing very solid, putting numbers up and the numbers tailed off here at the end of the year. But, I thought his checking game was pretty good.”

Doughty led all Kings players in ice time this season, averaging more than 25 minutes per game. Does he see that increasing in the playoffs, to say 30 minutes a night?

“That’s not necessarily a plan that I have, but I wouldn’t be surprised if it did get up there,” said Murray.  “Your match-ups are going to be, obviously, against the (Joe) Thornton line and the (Logan) Couture line and (Joe) Pavelski’s line is pretty good too. But, You need your best defensemen to play a lot of minutes against those top two, top three lines.”

For more from the coach… he spoke at length about Martinez and Mitchell in a recent article here, titled ‘Terry Murray Sizes Up His Defense.’