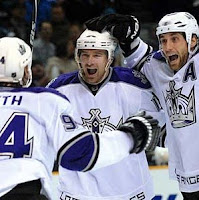 Even though the Kings lost game one to the Sharks in overtime, one of their forwards still managed to steal some of the headlines.

Justin Williams, returned to the line-up (surprisingly) after being out for just a few weeks with a separated shoulder.

With limited mobility and a tremendous amount of pain, he somehow found a way to be an offensive force for the Kings – first setting up Dustin Brown‘s goal and later scoring one himself to tie the game in the second period.

Williams didn’t register a point in game two. However, the Kings won 4-0, so nobody’s complaining.

However, did coach Terry Murray see anything different in the way Williams approached game two?

Murray – “The offense part of his game, I thought it was really good in game two – as it was in game one. They cycled the puck, did extended shifts deep in the offensive zone, which is his game. He was very confident with the puck. I thought on the other side of the puck there was it was good. There were some things I’d like all of our wingers to be better at – when the pucks come around the board, the dot to board game, in our d-zone especially, and to make some better decisions whenever we get the puck on our stick. But, he showed a lot of good things, again, in the offensive part of it.”

They say ‘coaches are always coaching.’ True.  And they also always want more.

Perhaps Williams can give it to him tonight in game three.