You are here: Home / comments / Coach Murray on what Oscar Moller could have done 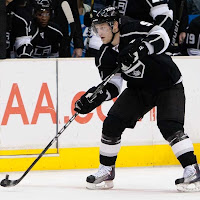 Oscar Moller was drafted in the second round of the 2007 NHL Draft.

This year’s Kings roster already featured players from the 2008 and 2009 drafts, yet he’s yet to crack the line-up on a consistent basis.

After suiting up for 13 more NHL games this season, that’s 87 total now for his career – which is nearly as many as he’s played for Manchester in the AHL (110).

He was one of the leading point producers for the Monarchs, while the Kings spent much of the season desperate for offense. Plus, with Tomas Sandstrom and Mattias Norstrom no longer around, he’s become LA’s favorite Swede.

So, was there anything more that he could have done to get some playing time?

Coach Terry Murray – “No, I don’t think so. I really liked what he did when he came up. I liked how he played in game two. We were under a very stressful situation with Jarret Stoll being out and he responded and played very well. I liked his game a lot. He’s got skill. He’s got imagination. He’s more of a sturdy player today. He’s going through a process too. He was on the team the first year and then, back to the minors. He’s grown, he’s improved his game. His mind has improved – in how and what he needs to do in order to play in the NHL. He’s not going to show Teemu Selanne blazing speed. He’s not a fast skater. But, he has intelligence and he has puck skills. That’s where he’s going to have to continue to give a big focus over the off-season. But, there would have been nothing else. When (Justin) Williams came back and told me he was ready to play, he’s going back in.”

Murray can continue to praise him, that’s all find and well. Yet, you have to wonder – will Moller ever really get the playing time in LA? And, with several larger, high-end prospects on the way, where do you put him?

It’s something GM Dean Lombardi is going to have to think long and hard about real soon, as Moller is a restricted free agent.