You are here: Home / comments / Clifford’s picking up points and gifts in the playoffs 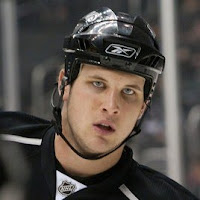 The Energy Line, the Prime Line, call them whatever you will – in the playoffs, maybe it should be the Power Line.

Kyle Clifford, Brad Richardson and Wayne Simmonds are the top point producing unit for the Kings through three games.

Normally, it wouldn’t be much to talk about just a few games into a series. However, when a team has already scored 11 goals, you start to notice some of the names at the top of the leader board.

For example, which forward leads the team in goals? Brown? Williams? Smyth? No – Clifford.

Sure, it’s only two goals. Still though, that’s more than several bigger names on the roster.

Here are some brief comments from each member of the line…

MM: Are you amazed at all with how Clifford has found a way take it to the next level?

Simmonds: No, actually. Since day one he’s gotten better and better and better every day. It’s been apparent in his first playoff series and I think he’s been one of our best players, to tell you the truth. It’s a great thing to see. He’s a 20-year old kid who goes out there and battles hard for every puck. He never gives up and he has that never say attitude. That’s what you need, especially in the playoffs.

MM: You guys work hard every night, but how rewarding has it been to contribute with some points also?

Richardson: I thought we’ve been playing well since we were first put together. It was just a matter of putting pucks in the net. We’ve had tons of chances, even in that first game versus San Jose. We had a few chances there, where if we would have put ’em in, the game probably would have been over. Cliffy’s had some good games though and we’re looking to keep that effort going and hopefully contribute more offensively.

MM: You certainly haven’t looked like you’re feeling any pressure. So, talk about what were you feeling during that first period last Thursday, your first NHL playoff game…

Clifford: Definitely, there were some emotions flying around. There was a lot of excitement, a little bit of nerves. I think the big part of it was just breathing a not getting too caught up in the moment.

MM: Earlier this year you told us you gave your first-goal puck to your parents for Christmas. Any special plans for the puck from Saturday, your first playoff goal?

Clifford: That’s probably going to go home too, go to my parents. I’ll wait until Mother’s Day or something like that.

Can they keep the momentum going tonight?

And will Simmonds pick up his first goal of the series?

Yes and yes, if Richardson and Clifford have anything to say about it.

Dustin Brown Selects his Rookie of the Year

Clifford and Westgarth Preparing to Get (Biz) Nasty?

Clifford Explains His Nickname – The Colonel