You are here: Home / hockey / Believing – For Love of the Game and Your Kids 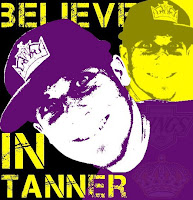 When a father has a son, it’s usually one of the best days of his life.

But, when your child is diagnosed with a chronic disease before their first birthday, it’s one of the worst moments you’ll ever experience.

On the path to better days, parents often find distractions. For Steve Raboin, hockey is his distraction.

He began attending games at the old Forum in the mid-80’s and slowly found his passion increasing with each passing season. However, after his wife gave birth to their son Tanner, Steve didn’t push his interests on his young boy. Instead, he waited for Tanner to develop a desire to know more about the sport all on his own.

Now 19 years old, he has the same interests as many teenage boys. Yet, long before Tanner was thinking of girls, he found his first love – hockey.

Around the time he was eight years old he asked his dad if he could go with him. Steve agreed only after Tanner promised to be a ‘good fan’ and watch the game, not go play in the aisles while the game was going on.

Tanner promised to behave and has been attending games with his father ever since. It was their special time together, enjoyed by both father and son. “We’re hockey buds,” says Steve. “We bond during our time together in Section 305.”

On the ice, Tanner was at first more interested in the team aspect. He didn’t have a favorite player, he liked them all.

Once he decided George Parros was the guy he most identified with, dad bought him a jersey. Only one problem, two weeks later Parros was claimed by another team when the Kings put him on waivers.

It’s happened to the best of us.

More recently, after saving the money from his first-ever summer job, he took the plunge again – Tanner used his funds to by a Wayne Simmonds jersey, his current favorite player.

And, fortunately, he’s still with the team.

On the other hand, Tanner hasn’t been to Staples Center this year with his dad to see Simmonds and the Kings play.

Tanner has Chronic Granulomotous Disorder (CGD). Basically, it’s a genetic disease that causes his immune system to not work properly.

“He has an immune system, but it doesn’t work for him,” Steve said. “Right away people think of the boy in the bubble, it’s kind of like what he has. He’s real susceptible to bacterial and fungal infections. Unfortunately, that stuff is prevalent everywhere.”

It’s also the reason Tanner is an only child. “If we had a second child, there was a high likelihood the second child would be sick too,” Steve said. “If we had a boy, there was a 50/50 chance he would be stricken with the disease and a girl would more than likely be a carrier of the disease. So, we chose early on to stop having kids because there’s no guarantee of what gender you’ll conceive.”

Meanwhile, Tanner has been extremely sick for the last two years and things went sharply downhill last April when doctors were unable to identify the bacteria in his lungs.

Tanner attended the fist Kings home playoff game against the Canucks, but that was it.

Then, when it came time for their annual trip to Las Vegas for Frozen Fury, Tanner was still too ill to make the journey.

Once he found out his dad wasn’t going without him, Tanner insisted he still go. It was a decision Steve wrestled with for several days, but ultimately he decided to go, after receiving some extra push from his wife.

And that’s when TannerHead was born.

Steve made up three ‘heads’ – one for him and each of his two brothers.

They snapped photos all the way up the 15 freeway on the long drive from Los Angeles to Las Vegas.

Anybody that’s ever taken a road trip knows all about the importance of a good scrap book. So, they texted photos back to Tanner and he loved it.

Some friends in Vegas borrowed one of the TannerHeads and it partied with a whole different group of people, creating even more photos.

Since then you’ve probably seen a picture of a Kings fan’s face taped to a stick and being carried around Staples Center, hanging out with Bailey at the All Star Game or even people taking pictures with ‘him’ at various Kings functions.

Steve came up with the idea before leaving for Frozen Fury, thinking his son would get a kick out of him returning with all sorts of photos – as if he was on the trip with him.

The whole thing took on a life of it’s own with Kings fans and complete strangers asking if they could have one too.

TannerHead has since seen the Kings play in Phoenix, Dallas and Colorado. He’s been to Australia and Japan. He’s global!

The real Tanner did a little traveling of his own this year, just not for pleasure. He’s spent time on the east coast with dozens of specialists trying to get his medical situation under control.

He’s coming home tomorrow. However, he’s not out of the woods yet.

He’s still sick. All fans in attendance at the Kings final regular season game are being asked to get involved by taking a simple swab test to see if they may be a match for a bone marrow donor. The process is simple and takes less than a minute.  Please click here for more details on what’s happening at the game today.

As for Steve, his number one priority remains finding a way to help make his son as healthy as possible.

If some day, some way, he can make it back to Staples Center, it would be a great moment. “It hurts him that he can’t go to the games,” Steve shared.

He has his Simmonds jersey waiting for him when he’s ready. However, the most important person in a Kings jersey for Steve isn’t one of the players on the ice, it would be the one sitting next to him in section 305.

SPECIAL NOTE: You don’t have to be at the game to help Tanner…

Visit this customized page on the ‘Be a Match’ website: www.bethematchfoundation.org/goto/tanner for more info.

You can also access their general page at: http://www.bethematchfoundation.org/

For additional information, please also take a moment to visit the the CGD Research Trust Awareness site. There are many other families out there and lots of great doctors trying to help them.  Link to their website –> http://www.cgd.org.uk/