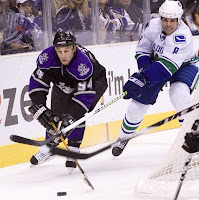 Remember those old friends from yesteryear who, truth be told, you really don’t care to ever see again?

Well, the Vancouver Canucks just might fall into that category for the Los Angeles Kings. Yet, the NHL schedule makers say they must play this afternoon at 1pm PST.

So, with that it mind, here are some key stats you need to know heading into the action at Staples Center…

* First things first, Dustin Penner – right? He’s played 29 career games vs the Canucks (tied with Minnesota as his most frequent opponent). In those games he’s posted 11 points(5g, 6a) and was a minus-2.

* Over the course of his career he’s been highly effective in day games, with 13 goals in 27 afternoon games (scoring ratio of .48).

* While both teams are listed with an average height of 6’1″, the Kings can ice a line-up of seven players 6’3″ or taller (Kopitar, Penner, Kevin Westgarth, Matt Greene, Willie Mitchell, Michal Handzus and Alexei Ponikarovsky). Besides Luongo in net (6’3″), the only other player on the Canucks roster taller than 6’2″ is defenseman Sami Salo (6’3″).

* Jonathan Quick is 2-0 against the Canucks this season and has only given up one goal in each contest.

* Brown and Williams have each scored two goals against Vancouver this season.

* In the last 10 games for the Kings, Drew Doughty has scored four goals (and added two assists) and Kopitar has 13 points (4g, 9a).

* Milestone Tracker – Jack Johnson needs two more points for 100 in his NHL career.  Williams is two points from 400 in his career. Luongo, the Canucks starting goalie needs one win to become the 25th netminder in history with 300 NHL wins. Manny Malhotra’s next goal will be the 100th of his career.

* Perfection after two – both teams are undefeated in regulation this season when leading a game after two periods. Vancouver is 29-0-3, LA is 19-0-0.

PennerMania By The Numbers (and video)

Chirping with Dustin Penner – interview from his first practice with Kings