You are here: Home / comments / Mark Hardy on Kings Defense and Power Play 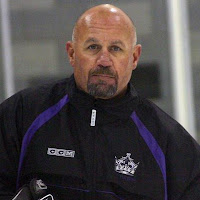 In some ways, perhaps the thing Mark Hardy knows best is the Kings defense.

He was drafted by LA in 1979, patrolled the team’s blue line for 616 games (third most in franchise history) and spent ten years coaching Kings players following his retirement.

Last night he skated in a charity game along side fellow Kings’ alum Luc Robitaille and Marty McSorley – his teammates during their run to the Stanley Cup Finals in 1993.

Afterwards, I spoke with him about what he’s been up to and what’s next for him. The conversation wouldn’t best be presented in written form. You’ll want to hear it from him, rather than read it. So, he’s agreed to come on the MayorsManor podcast later this week (available here).

However, I wanted to pass along his thoughts on this year’s team, namely the defense and power play…

MM:  How tough has it been to watch the games this year?

MH:  You know what, I like to cheer on the guys that I’ve coached. I was in Chicago for two years. I still like to watch them and on cheer on the guys who I know. Obviously, working with the ‘D’ on the Kings last year, I miss doing that. I think when it’s in you, you never know how much you’re going to miss the game until you’re out of it. Right now, it’s been very, very tough. I knew I needed to heal and now I’m just looking forward to whatever is going to happen next in my life. I take a positive attitude, I make sure I’m sober and I believe that things are going to be good for me.

MM:  Jack Johnson and Drew Doughty are two guys who you’ve seen grow up in the league.  Having not been on the ice with them at practice and watching from the bench, what have you noticed about them by following the games as a spectator?

MH:  They’re playing steady hockey, they’re playing winning hockey. They’re both putting up points every once and a while, maybe not like they did last year (in the case of Doughty) – but, they’re playing very solid hockey and it’s fun to watch them play. They’ve really limited their mistakes and I think the record of the team shows that. They’re becoming true veterans now, even at their age. They’re so young, but they’ve had so much experience – including Johnson playing on Team USA and Doughty on Team Canada. It just makes you a better hockey player, playing at that level. I just think they’re playing steadier all the time and it’s very rewarding to see that.

MM:  Plus-minus is a one of those stats that some coaches will tell you they don’t pay much attention to –

MH:  Not until there’s negotiations (he laughs)

MM:  OK, true. But, what is it about Johnson that he always seems to be picking up minuses no matter how well he is playing?

MH:  You know what, he’s learning. He’s getting better every year. He’s learning the game. It takes a long time for a young defenseman to learn the game. He is learning it. I can see him playing better and steadier. He’s only going to get better with more maturity and the way Terry Murray coaches a team. I think last year he was just under minus-20 (actually minus-15). So, now he’s improving (currently minus-13) and every year he’ll improve. I think now he can just relax and play defense after he signed that long contract. He doesn’t have to worry about getting points. They’ll happen, they’ll come for him. He’s a very talented young man. I just think he’s going to get better and better defensively in his own end – reading the rushes, keeping it simple in his own end and moving the puck quickly. And I think he’s been doing that this year.

MM:  People came into the season expecting a battle in net between Jonathan Quick and Jonathan Bernier.  It seems like it’s finally upon us over the last 10 or 15 games.  What are your thoughts on the play of the two goalies?

MH:  I think you have to have that competition in any sport. I think they push each other and I think they’re both playing very well right now. That’s the thing with the Kings this year, they have two very good goalies that they can go far into the playoffs with. It doesn’t matter who is playing right now and how they’re going to pick a number one to start the playoffs, I don’t know. That’s going to be a tough decision. But, it’s nice to be able to make those decisions this year and that’s going to be a big plus with them – making the playoffs and going into the playoffs. It’s a great time for the Kings right now having those two guys in net. They’re both quality people. They’re good goalies. And they both compete like crazy. So, it’s a good thing for the Kings right now.

MM:  Knowing that you want to get back into coaching (something we’ll talk about in an upcoming podcast), has it been frustrating to watch the team at times this year – especially when they’ve struggled on the power play?

MH:  You always look at things like that. But, I know that coaching staff is very capable and I also know that those are good players. They’re still winning right now. If they get that power play going, there’s no stopping them. Their penalty killing is fantastic, I’ve been watching that and it’s just amazing. The power play will get going. I think they got a big one against Columbus. I think adding (Dustin) Penner into the team is a big bonus for them. He’s a big guy. They’ll put him in front of the net on the power play. The goalie isn’t going to be able to see it and if they can get their shots through, they’re going to score lots of goals and get hungry with the rebounds and stuff like that. Jamie Kompon does a great job. He works very, very hard at it every single day. Sometimes power plays will just start clicking. I have a feeling it’s going to start going for them soon.

MM:  Kompon has come under a lot of criticism this year –

MH:  And he shouldn’t. I think sometimes the players have to take responsibility as well. I worked with Jamie the last couple of years there and he does a fantastic job. He works endlessly on video and watching games, taking notes and talking to players. He does a very good job there and, like I said, it’s just a matter of time before that power play starts clicking.

Hardy had a lot more to say, especially about his future. That’s why he’ll be he was a guest on the podcast this week – talking about the Stanley Cup Finals in ’93, his time in New York, working with Andy Murray, the development of Kyle Clifford (the kid he called ‘MVP of Rookie Camp’ back in 2009), the Rob Blake situation and much more – including word association.

The one thing I’m sure that will come up more than once is something he said with overwhelming emotion on Saturday night, “I miss the game tremendously.”

[update: the podcast with Mark Hardy is available here – check it out]