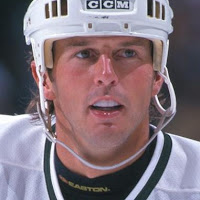 Mike Modano is the greatest American-born hockey player of all-time.

At least that’s what the readers of MayorsManor said via their votes in a poll last week.

It’s an obvious choice too, as he’s scored more goals and points than other strong contenders, like Jeremy Roenick, Pat Lafontaine and Chris Chelios – not to mention his representing Team USA in 11 different international tournaments.

Taking nothing away from the other three though, perhaps what also helps elevate Modano to his deserved pedestal is his class. He’s been one of the most respected players in the league for 20 years and remains so to this day.

While some eyebrows were raised last summer when he chose to sign with Detroit, rather than retire, those thoughts turned to concern when he severely damaged his wrist in November. Determined not to end his career on an injury, he battled back and returned to the league a few weeks ago.

Tonight he’ll face the Kings for the second time since rejoining the Red Wings five games ago.

In the interview below we look back over his incredible career – talking milestones, memorabilia, Messier, head injuries Jaromir Jagr, Brett Hull…and of course, we play word association.

(note: This is just a portion of an interview originally conducted prior to a game in LA last season. It is being re-published for all the new readers and/or people that may have missed it the first time around)

Back at the draft in ’88 you were only the second American player ever to be taken first overall. Being only 18 years old, did it mean anything to you at the time?

Yeah. I knew the guy before me, Brian Lawton. I knew him and the history of the draft – how rare it was for an American. Going into it I was hoping to be the second guy to accomplish that. In the small scale of things its something I wanted to have on the resume.

You scored your first goal off a former Kings goalie, Glenn Healy, when he was with the Islanders. As players get older they often comment they wish they would have saved more memorabilia from when they were younger. Did you save that puck?

I think I have that puck and the stick back at my parents house in Detroit. I don’t really remember collecting and keeping the first few milestones. But, lately I’ve been saving things – like goal #500, 1000 points, breaking Housley’s record, 700 assists. Things like that.

The first season in Dallas you had a great year. You had 50 goals. Did you put any extra pressure on yourself to have a great season that first year in Texas?

I just kinda looked at it as a fresh start. Things were going OK, personally for me in Minnesota. Having a start in Dallas, we figured here’s an opportunity to get a hold of this different demographic and try to create a fan base by really entertaining them. And things just happened from the start. It was just one of those years – from start to finish. We had a little luck along the way, but we had some great talented guys on that team. So, I was fortunate to have players around me that helped me get to that level.

When you scored goal #503 in Nashville (to pass Joe Mullen and become the all time leading American goal scorer), they didn’t acknowledge it. Did that offend you?

Well, it didn’t bother me. We had some issues prior to the end of the game with a couple guys that kinda put a little bit of a black cloud over the whole night. (Stephane) Robidas was knocked out by (Jordan) Tootoo and dampened the whole event. Plus, we lost 3-2. It wasn’t the best of nights to celebrate. We had a little bit of a rivalry going into Nashville. We’ve had some heated games against them. But, you think that they could have done something there for a second…like what San Jose did when the points record was broken. (note: He broke Phil Housley’s points record there in Nov. 2007)

Along those lines, one of the hot topics this season has been the hits around the league and the legality of them. And of course, the punishment handed down or not handed down in some cases. Any thoughts about the hits this year?

Well, its such a sensitive issue. It has gotten a little bit out of control. There seems to have been some blind side hits. A little after the fact, after they’ve moved the puck, guys have been hit. Whether there’s a two or three count before they get some body contact, you know. So, yeah – if you’re trying to keep the game safe and ensure players careers aren’t being jeopardized, its a smart move. It seems like every year players in all sports are getting bigger, strong and faster. Every year the concussions seem to be increasing. The union and the league have tried to work together to reduce it, but its tough. When the game is moving so fast and bodies are moving around its really tough to sometimes get out the way, or its accidental and some people lose their balance and they get hurt. There’s a real fine line there that can keep somebody from getting hurt or just some routine body check that looks like it happens every night and could hamper someones career.

You’ve had a special relationship with the fans through the years. Whether it’s pictures or autographs, you always seem to do it with a smile on your face. When so many other athletes these days are put off by it, where do you find the motivation to continue to be so approachable?

I think a lot of it is my mom. She still calls to make sure I take time…She still harps on me to go out of my way to make a kid’s day. When you were a kid sometimes it was the highlight of your year to go to a game or meet some guys. She still has pictures of me when I met Dale Hawerchuk and Phil Housley for the first time…and Wayne Gretzky. You just put that in your brain, that you’re possibly having an impact on a kid’s life. So even though we’re meeting people all the time, you still take a moment to say hi or give an autograph.

When you look back over the last 20 years is there one guy that you never were teammates with that you say to yourself, ‘Man, I wish I could have played just one season with him’?

Probably Jaromir Jagr. I think he was one guy that could just dominate anytime he wanted to. He had the size and skill. Such an unbelievable talent. One year with him would have been great.

Back in the summer of ’96, obviously winning the World Cup was the highlight, but do you have any other vivid memories of that tournament?

I think about how much fun we had that summer. The week that we had in Providence leading up to the start of the tournament. Guys got along so well, we did everything together. We had such a great time. We just felt like this could be an opportunity where – some of the greats Leetch and Chelios and Richter were still there, some of the younger guys were coming of age, we were all 25, 26 at the time. Then leading up to the tournament we thought we had a good chance of meeting Canada in the finals. To be honest, being a three game series, even though we lost the first game in Philly, we still felt pretty good going into Montreal and that we could make things interesting. It was probably one of the more exciting games I’ve played in – being at the Forum in Montreal, a deciding game three against Canada and the type of team they had at the time. Those are some great memories.

Players see and experience the arenas differently than the fans in the building. Being down on the ice, what is the loudest arena in the league?

Some seem to be louder at different times. I would say Edmonton in the playoffs is one of the loudest ones I’ve ever been inside of. Same with San Jose. In the playoffs its pretty noisy. St Louis too. And Chicago, of course. The new building in Chicago is like the old one. Fans are starting to stand up during the anthem and sing during the whole thing. Old Chicago Stadium will always stand out in my mind. Believe it or not, the old Reunion Arena here in Dallas could get pretty loud too with the fans on top of the ice. You felt like you heard everybody that was in that building.

Who is the smartest player you ever played with and what did you learn from him?

Two of the smartest ones would be Sergei Zubov and Brett Hull. They thought the game through. They were never in a rush to do anything, yet they could do things quick when they needed to. They were in the right place at the right time. They never seemed to be out of position at the point where the could be effective. They were patient and had great poise. Both things that are hard to teach.

Word Association – in honor of your #9 we have nine guys you played with. Just rattle off the first thing that comes to mind…

Finally, finish this sentence – My life in hockey was complete because…

Because I had a chance to play in the NHL.

Players speak out on Luc Robitaille

Interview w/ Rob Blake – details surrounding his on again, off again relationship with the Kings

Interview w/ Ethan Moreau – then captain of the Edmonton Oilers