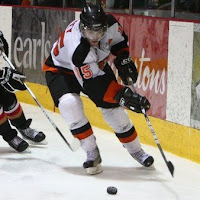 If you’ve been following along all season – of even half way paying attention – you know that many of the Kings prospects are having exceptional years.

Linden Vey, a fourth round pick in the 2009 NHL Draft, would have to rank right up at the top of the list, having just won the WHL scoring race on Sunday.

His 116 points (46 goals, 70 assists) helped lead the Medicine Hat Tigers to a third place finish in the WHL’s Eastern Conference and they’ll begin their 2011 playoffs this Friday night against the Brandon Wheat Kings.

MM: So – Linden Vey, WHL scoring champion – how does that sound?

LV: Obviously it’s been a long year and I wouldn’t have thought at the start of the year that this is something that would be happening right now. But, it’s been a good season and I have to give credit to my team. I don’t think I could have done it without my team. We have a good group and we’ve had a good year. We reached 100 points and we’ve all had a good year this year.

MM: You had 24 goals in each of the last two seasons and then nearly doubled that with 46 goals this season, why the big jump? What do you attribute that to?

LV: I spent lots of time in Los Angeles training (over the summer). I think that was one of the biggest things. I think coming into the year it was the most I’ve ever been prepared for a season. So, I think that’s one of the things that has helped me the whole year. I think I’ve had that extra step the whole season and it’s been good. Another thing, I think, is just confidence. I started to shoot the puck a lot more. I think if you want to score goals, you have to shoot the puck. I started to do that more and things have been going in.

MM: When we talked back in November, besides conditioning, you said you were also tyring to round out your defensive game this season. How do you feel you did in that area?

LV: I think it’s gotten better. If you want to play in the National Hockey League, you have to be good in all areas of your game. I think it’s something that’s coming (around). Last year and the year before it’s something I struggled with a bit, in my defensive zone. If you look at my plus-minus from those two years and the jump to this year, I think you can tell I have been working on it (MM: minus-2, plus-5, then plus-37 this season). I think that’s also one of the reasons I’ve been putting up better numbers. I’ve spent less time in my defensive zone. If you play hard and do a good job in your own zone, you spend less time in there and you’ll spend more time in the offensive zone – which gives you more chances.

MM: Another thing you mentioned in that November conversation following the Super Series vs. Russia, was that you think “whenever you’re playing against the top players in the league you have a little extra desire to want to win. You want to compete against the best players.”

Shortly after the World Junior tournament Brayden Schenn was traded by Brandon to Saskatoon, the top team in the WHL. You guys played them twice over the balance of the season. In the first game, the Blades won 5-4 and you both had three points. What do you remember about that game?

LV: A little bit. I just remember us being down three goals going into the last 10-15 minutes and then we tied it up. I think every time we play Saskatoon they’re a good team and we know that going into the playoffs, if we want to go far and end up winning the league (championship), we’ll have to sooner or later run into those guys. Obviously, I’d really like the opportunity to be playing against those guys.

MM: In the rematch a few days later, you guys won 5-2.  Both you and Schenn each had an assist.  Any memories from that one?

LV:  I just remember they had a tough schedule there. They were playing in Kootenay, which is six hours away, and they got in probably around 3-4 in the morning. I think we just jumped all over them and we caught ’em. We’re a good team at home and we played well.

MM: First things first, the playoffs will start later this week and you guys will be playing the Brandon Wheat Kings. Size up the series for us, I’ll assume things should at least be a little bit easier without Schenn there…

LV: I think so. But, at the same time, we have to realize they’re a good team. One of the things is, you cant take any team for granted or any team lightly. I think you have to go in there and focus on what you need to do. We just have to play our game. They’re a good team and they’ve been playing real well the last couple of months. They’re one of the hotter teams in the league. We respect that. Going into the first couple games we have home ice and we that’s really good for us. We just have to make sure to come out ready right off the bat.

MM: You mentioned their strong play of late. Yet, if you had to pick one thing that you’re most concerned about heading into the series what would it be?

MM: This is it, most likely your final year in junior hockey. If you guys were lucky enough to get to the Memorial Cup, what would that mean to you personally?

LV: I think that’s everybody’s goal, to win the Memorial Cup. People don’t remember who won the scoring titles, which team won the regular season – it’s all about the Memorial Cup. Like, I can’t even think of the teams that won the regular season the last few years. But, you always know who wins the championship. So, that would be a big thing for us. I know this is my 19-year old year and I’m excited that we have a good opportunity here in the ‘Hat to make a good run at it.

[Note: Just to clarify, he technically could come back for an ‘over-age’ year next season – however, he most likely will be in Manchester (AHL)]

MM: If you’re up for it, how about we end with a little Kings trivia question…

MM: Can you name three of the five retired Kings jerseys hanging up in Staples Center?

LV: Right, Marcel Dionne. I know that one. That would probably be about it.

We laughed a bit and he asked who the others were. I informed him and then promised him some more Kings trivia when he’s in LA this summer.

For now, he needs to focus on the task at hand – beat the Wheat Kings in the first round.

He has plenty of time to brush up on his Kings history down the road.

Special note – tomorrow I’ll have an interview up with Tyler Toffoli, the Kings second round draft pick from 2010 and new OHL scoring champion.

Interview with Linden Vey – following the Super Series vs. Russia