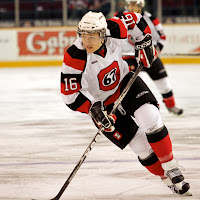 Heading into the NHL Draft last June many scouts had Tyler Toffoli pegged as a late first rounder. With some questioning his skating ability, he dropped a bit and when he was still sitting there mid-way through the second, Kings GM Dean Lombardi did his thing – ‘Dealer Dean’ traded his second and fourth round picks to move up and nab him.

The Kings knew a thing or two about Toffoli already. Hailing from Scarborough, Ontario – the same hometown as forward Wayne Simmonds – it was in fact the same scout who tipped the Kings off on both players.

Like Linden Vey over in the WHL, Toffoli won the scoring race in his league this season. However, technically – since the OHL doesn’t have a tie-breaker system – he is the co-champion.  Toffoli tied Flyers prospect Jason Akeson (Kitchener Rangers) with 108 points, even though his 57 goals more than doubled Akeson’s 24.

He ended the year strong as well, being recognized as the OHL Player of the Week for the third time this season and capped everything off with a five point game in his final contest – including four goals, staring with a natural hat-trick.

As if that isn’t enough, he was also just announced as a finalist for the Red Tilson Trophy, the most prestigious individual award presented by the OHL, going to the league’s Most Outstanding Player.

He last visited MayorsManor in November, so I spoke with him this week to talk about all that’s been going on and for a look ahead to the playoffs coming up this weekend…

MM: Prior to the season I spoke with your General Manager Brian Kilrea. Some of the things he said about you included calling you a great play maker, somebody still needing to develop physically and that you were a better right wing than a center. Any thoughts on those comments?

TT: I agree with him. I feel that I’m a better right winger. I feel I play positionally better there and it’s just a better fit for me. Throughout this season I’ve learned a lot about myself and what I really have to improve on. I think last summer I got a lot stronger, but there’s definitely a lot more room for improvement.

MM: Along those lines, he went on to say he wanted to see you play more consistently up and down the ice – specifically saying you sometimes coast to see the play coming. Was that a fair assessment of where your game was six months ago?

TT: I think my second year in the OHL (last season) I didn’t really play a complete game. I just kinda thought of myself as a one dimensional player, an offensive player. This season I really feel I played a strong two-way game. I was really good in my own zone. I know my coach trusts me in my own zone. He knows I can do well along the boards and get pucks out. So, I think this season I really improved in my defensive game and I played a lot more of a complete game.

MM: Well, offensively you sure got the job done. So, ‘Tyler Toffoli, OHL scoring champ’ – how does that sound?

TT: It sounds good. Going into the final game of the year, obviously I wanted to win because we were going to play Sudbury again in the playoffs, but I wanted to do well for myself too – personal goals. I’ve had a pretty solid season and hearing my name, being in first, it just sounds a lot better than being in second or third.

MM: Now, the standard answer to the next one is something like ‘it’s just an honor to be included’ – but, is there a little disappointment in being named co-champion, especially considered you had more goals (which most people would consider to be the tie-breaker)?

TT: I would say yeah. Definitely, you want it all to your self. But at the same time, what are really the chances – I was reading and I think it’s only happened four times ever that it’s been a tie. I know it happened last year too, but it’s still just as exciting knowing that I led the OHL in scoring. Even if it’s a tie, it’s still a pretty amazing feeling.

MM: Tell us about the big milestone, goal 50. What did it mean to hit that number and where is the puck now?

TT: It was a huge accomplishment. I scored it in Plymouth. I got the puck and my parents were at the game, so I gave it to them right after the game. But, it was an amazing accomplishment and I knew right after I scored 50 I wanted 60. Fifty goals is a good achievement. But, at the same time, you always want more.

TT: I think I’m just going into the season and play my game and do the best I can. That’s what I did going into this year. I don’t ever really set goals for myself. I tend to set goals as they come. So, 67 goals would be a pretty amazing achievement.

MM: Your fellow Kings prospect Linden Vey won the scoring title over in the WHL too.  When I spoke with him recently he attributed part of his success this season to his off-season conditioning in LA. Would you say the same is true for you at all?

TT: Absolutely. I didn’t get the opportunity to train in Los Angeles as much as he did. But, I know when I was there for the Development Camp (July) and the Rookie Camp (September) I learned a lot and I really tried to bring that into my season this year.

MM: Was there anything specific, maybe one or two things, that the coaches taught you or said to you that made a difference?

TT: At the Development Camp I learned that I was in nowhere near the shape that I needed to be in to be there. So, I really worked hard in the summer and did as much as I could throughout the remainder of the summer to try and do my best at the main camp. Then, throughout this season I’ve been training and working a lot harder than I have during the previous two years.

MM: Before we talk about the playoffs coming up this weekend, tell us a little about your teammate Shane Prince. He’s getting ready to go through the draft in June and is expected to go probably in the late first round, early second – similar to you. Have you shared any of your experience with him?

TT: He’s a great player who has a lot of skill. He’s a really fast, quick skater – even though he doesn’t really get recognized for that sometimes. He works hard and I think the team that picks him is going to be really impressed with him. But, we’ve only talked about the process briefly. I know he’s excited to go through the experience and I told him just to be patient and not get too excited, it can be a long process.

MM: All right, the playoffs – you guys have the Sudbury Wolves in the first round. Size up the series for us.

TT: I think they’re a good team. They’re a hard working team and they have a lot of skill, plus the best power play in the league. So, we have to be disciplined and work off their defense low and get lots of shots on net.

MM: I’m sure you don’t want to look past the first round, but at some point the road to the championship goes through Mississauga, as they were the top team in the regular season. From what you’ve seen, just how good are they?

MM: For you personally, what would it mean to win the Memorial Cup this season?

TT: It would be a huge accomplishment. Obviously it’s not every year when a player can play in the Memorial Cup or win it. So, we just have to work hard and hopefully we can get some luck and go far, make the Memorial Cup and then obviously do well in that tournament.

MM: How about we wrap up with a Kings trivia question? Most of the prospects haven’t been doing so well with these recently. You up for it?

MM: You’re a big time goal scorer this season, so let’s go with this one – at the top of the Kings record book for most goals scored in franchise history, can you name either the guy who is #1 or #2 on the list?

MM: Exactly, Luc had 557 goals. For bonus points, do you want to take a shot at who’s record he beat to reach number one?

MM: Good guess, but no. It was Marcel Dionne with 550 goals.

Toffoli’s on a roll.  He won the scoring title, he’s up to speed on some of his Kings trivia…now, can he find a way to help the 67’s get to the Memorial Cup?

Game one of the OHL playoffs will be this Friday night.  So, we’ll know in about a month.

Interview with Tyler Toffoli – recapping the Super Series versus Russia

Interview with Nic Deslauriers of QMJHL