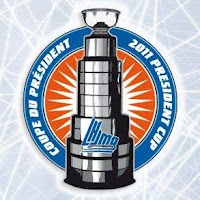 The future has never…NEVER, EVER!…looked brighter in net for the Los Angeles Kings.

Already blessed with two solid aces at the NHL level (Jonathan’s Quick and Bernier), plus two gems in the making at Manchester (Martin Jones and Jeff Zatkoff), it’s easy for some to forget about JF Berube.

After all, he plays in the Quebec Major Junior Hockey League, the often less publicized of the three Canadian junior leagues.

However, Berube – taken by the Kings in the fourth round of the 2009 NHL Draft – isn’t somebody to be ignored. He was under consideration for the goalie slot on Canada’s recent World Junior team (in fact, he provided a report here from their summer camp last year) and he just finished the regular season in the ‘Q’ as one of the top goaltenders, statistically speaking.

Last night, his Montreal Junior team won their opening round playoff game against the visiting Halifax Mooseheads 5-3. Of course, Berube was is net.

Prior to the game though, I spoke with him as part of our ‘prospect playoff preview’ series this week on MayorsManor…

MM: Last summer you said you wanted to approach this season with the goal of being one of the top goalies in the league and you wanted to have a “big season.” Did you feel you accomplished that?

JFB: Yeah, I’m pretty happy with my season. I think I accomplished all of my goals and I’m where I wanted to be at the end of the regular season.

MM: Do you follow any of the action going on over in the other Canadian junior leagues, the WHL and OHL?

JFB: No. I try to focus on the teams here. There’s plenty to focus on in our league. But, now that we’re heading into the playoffs, of course I’m going to watch a bit more of the OHL and ‘Dub. You never know if we’re going to go to the Memorial Cup. But, it’s something to start looking for.

MM: The Kings also have another prospect in the ‘Q’, Nic Deslauriers of the Gatineau Olympiques. Your two teams played six times this season. What do you think of his progress since the last time we spoke?

JFB: He got stronger and I think he gained a lot of confidence. He’s definitely a key player for Gatineau this year. When he played against us he was one of the best defensemen on his team, I think. He had an impact on the games, either through good scoring chances or a big check. He’s getting better and better.

[note: Deslauriers will be on MayorsManor later this afternoon with his own interview and playoff preview – update: the interview is now available here]

MM: Recently, The Hockey News ‘Future Watch’ edition came out (ranking the NHL prospects) and neither of you guys were listed among the Kings top 10 prospects. Being excluded from lists like that, does it motivate you at all to prove people wrong?

JFB: Yeah, of course it does – when you don’t see your name up there. You always want to be included in the top (rankings). When you’re not there, you’re just trying to work even harder to reach the top of the list. So, of course, that’s something that can motivate me.

MM: Do you sometimes feel lost in the shuffle though, with all the other names in the Kings system that get so much attention – guys like Brayden Schenn, Tyler Toffoli, Thomas Hickey, Martin Jones, etc.?

JFB: Not really. I’m just doing my thing. Sometimes it’s better like this, to not have the spotlight on you. So, you can do your own thing and you’re not distracted by all the attention. Of course, it’s fun to be known too. But, I’m just focusing on my game.

MM: How about specifically the goaltenders. Jones is having a great year in Manchester. When you see prospects ahead of you on the Kings depth chart playing well does it worry you at all, how do you feel about it?

JFB: Of course I’m happy for him. He’s a good guy. He’s working hard and good things happen to you when you do things right. I think he deserves it. For me, it’s just another challenge to (motivate) me over the summer to try and be as good as he is.

MM: Speaking of the summer, the Kings have until June 1st to get you under contract (per the CBA). Have there been any negotiations and if so, how are things looking?

JFB: I don’t know where things are right now. I know I’ve spoken to Denis Fugere, their scout in the ‘Q’. I think they’re pretty happy with my game and they just want me to focus on my season. Once it’s done, we’ll see what’s going to happen. Of course, it’s something I expect (to get done) and I can’t wait to see what’s going to happen because I want to play for the LA Kings. So, I’m going to do everything to make it possible.

MM: You might have one more season of junior hockey left, so playing for Team Canada at the World Juniors next year is still a possibility. However, how disappointing was it to not make the team that competed in Buffalo a few months ago?

JFB: It’s such a great feeling to wear that jersey. I think I did the best I could do. There are some decisions we have no control over. I’m still happy with my performances during those camps and (not being included) gave me the chance to rest during Christmas. Maybe that’s best for me.

MM: The last time I saw you here in LA you were rocking the George St. Pierre (UFC fighter) mask. But, you came up with something new for this season, right?

JFB: Yeah, I had a new design this season because my GSP mask (picture here) was signed by George and the team is going to raffle it off for charity. I’m not exactly sure when, but it hasn’t started yet. At first, I was pretty disappointed when I heard about it because I wanted to keep it. But, I guess the team actually owns the mask.

MM: Interesting. Did the same woman that painted the GSP mask do your new mask and talk about the process of coming up with the new design – how involved do you get?

JFB: Yes, she’s done three of my masks now and I’m pretty happy with the job she does. Goalies are pretty (particular) about their gear and the mask is probably one of the most important pieces of equipment for us. We try to get something specialized for us. We don’t want anyone to have the same kind of thing. So, say for Montreal, I try to put some buildings on it and there’s some special things on it too, like I put the LA logo on the back. It’s always really personalized.

MM: Let people get to know you a little better, away from the ice. What do you like to do for fun?

JFB: This season I’ve been playing a lot of acoustic guitar in my free time. I just enjoy it, it’s so relaxing to get away from hockey and do something else. I started playing about two years ago. But, more recently I’ve been playing more extensively – like two or three hours a day. After practice I was playing guitar with a buddy from my team who is pretty good. We were trying to write a song. But, it hasn’t been completed yet.

MM: Maybe you guys can pick it back up when the playoffs are over (we laugh). Size up the first round for us. You guys are playing the Halifax Mooseheads. What does Montreal have to do to win this series?

JFB: We just have to play our type of game. We’re a give and go type of team. When we don’t work we’re not the same team. So, if the guys work during the game, things should be OK. Halifax is a good team, but we’re better than them. We just have to focus our plan and not worry about them.

MM: You guys have played so many one goal games this year. So, you probably don’t need to change much for the playoffs, right?

JFB: Yes. Those one goal games are pretty much the story of our season because most of the games were tied and even when we ending up winning 5-2, the game was 3-2 until the end. So, that’s a good thing for us because we know in the playoffs they’re always tight games. So, that’s an advantage for us – to get that experience for the playoffs.

MM: You mentioned the Memorial Cup earlier, and obviously that’s a ways down the road, but if you’re lucky enough to get that far, what would it mean to you personally to win the Memorial Cup this season?

JFB: We play hockey for those kind of moments. We’re going to put all of our efforts into the possibility of going there. That’s the ultimate goal, to win the Memorial Cup, and we’re going to try everything to reach that goal.

Best of luck to Berube and his Montreal Junior team in the QMJHL playoffs. They’ve gotten off to a great start by winning their first game and game two will be later tonight.

Who knows, maybe he’ll have such a strong performance people will even start talking about him more. He’s certainly one to keep an eye on.

Interview with Nic Deslauriers of QMJHL