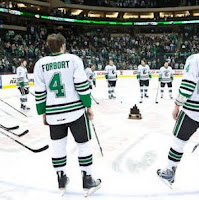 Standing 6’5″ and a freshman at the University of North Dakota, Derek Forbort is still years away from seeing time on the blue line in Los Angeles.

Still, when he goes from being the Kings number one draft pick in June 2010 to the team’s highest rated defensive prospect eight months later (according to The Hockey News), people take notice.

He was a member of the Team USA squad that won a bronze medal at the recent World Junior Championships and later this afternoon his Fighting Sioux team will enter the NCAA tournament as the number one seed in their regional.

As part of our ‘prospect playoff preview’ series this week, Forbort made another visit to MayorsManor…

MM: The recent Hockey News ‘Future Watch’ edition listed you at #49 among all NHL prospects, covering all the teams in the league. That also placed you as the highest rated defenseman among the 10 Kings prospects. Did you see it and does that mean anything to you?

DF: No, I didn’t see it. I have no idea what you’re talking about. But, I guess that’s pretty cool.

MM:  How about this then – we last spoke right after you won a bronze medal with Team USA at the World Juniors.  About a week ago Dean Blias was announced as the coach for next year’s team. What do you know about him and what do you think of the choice?

DF: I didn’t even know he was named coach. I know he’s a winner though, getting a gold medal last year, and he’s doing well at the University of Nebraska-Omaha. So, it would be an honor to play for him if I get the opportunity.

MM: You didn’t know he had been named as the coach?

DF: I had no idea at all. News doesn’t make it to the Great Plains.

MM: I’m sure you heard about this one – at the NHL trade deadline last month the Kings moved one of their top rated defensive prospects, Colten Teubert. How do you feel when you see something like that, are you thinking there’s now one less guy in the pipeline standing in front of you and your dream of making it to the NHL?

DF: I don’t know. I guess I’m not thinking that far ahead. Right now I’m just thinking about developing my game and developing my body. I mean, I guess that could become a factor later on the down road. It’s not an issue right now though.

MM: Last time we talked you were itching to score your first goal. It still hasn’t happened though. What’s going on, are you starting to grip the stick a little too tight?

DF: Ah geez, I don’t know. I consider myself just a good, puck moving defenseman. I don’t know. It just hasn’t came for me yet. I’ve had opportunities. I just focus on making the right plays and that’s just what I’m doing.

MM: In looking over the stats though, you’ve only taken 23 shots on goal all season.  Do you think that might be the problem?

MM: You finished with a +21 rating, that’s pretty solid. That has to feel good for your freshman campaign.

DF: Definitely. We had a good team all year and we scored a lot of goals. So, a +21 is a good stat for me and I’m happy with the way I’ve been playing.

MM: You were also one of the top shot blockers on the team this year. Is that something you’ve done a lot of in the past or was it a new skill you’ve learned while at UND?

DF: I’ve always been kind of a big shot blocker, ever since my days in bantam hockey. I guess the pucks have just been hitting me this year. We have a lot of guys willing to sacrifice their body though.

MM: Let’s talk about one of your teammates for a second, Matt Frattin – he’s under consideration for the Hobey Baker award (the college hockey equivalent of the Heisman Trophy). What can you tell us about him?

DF: He’s a phenomenal player. He has one of the hardest wrist shots I’ve ever seen. He’s a big-time player, he’s played big for us all year. He’s been amazing.

MM: We talked a little bit about campus life in one of your previous interviews this season – give us a bit of an update on school. What class has been your favorite and why?

DF: My favorite class was probably an acting class this semester. It’s been pretty challenging, but it’s also been a good time.

MM: What’s the end game with the acting class, do you guys have a performance of some sort or it’s all about working on personal skills?

DF: So far we’ve just been working on personal skills. I know we’ll have some sort of end project though and hopefully that goes well.

MM: Talk about the Final Five game from last weekend (WCHA Championship), an incredible double overtime game. What were the emotions you were experiencing in the game and then in the celebration after?

DF: The whole game was just crazy. It was so much fun playing that game, just back and forth. I guess there was just a huge feeling of relief after Frattin scored that goal.

MM: What were some of the things being said in the room during the intermissions leading into the first and second overtimes?

DF: Guys were just trying to stay positive. We knew we had to keep going, keep being aggressive and just go for that win.

MM: For the opening game of the NCAA playoffs this weekend you guys will take on RPI. Size up the game for us.

DP: They’re a hard working team with a bunch of small, speedy forwards. It should be a tough game. We have to come out prepared and hopefully get the job done.

MM: Knowing that if you win the first game, there’s a possibility Denver could be waiting there for you in the second game – is there a sense at all that some guys might be looking past the game with RPI?

DP: No, not at all. We’re focused and know North Dakota has struggled in the first round the last few years and had some early exits. So, there’s no chance that we’re looking past RPI.

The defending National Champions, Boston College, were downed by Colorado College 8-4 in the opening round Friday night. So, like they say ‘anything can happen in the playoffs.’