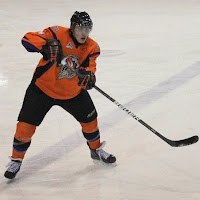 Timing is everything in life. How many times have you heard that saying?

A year after being taken by the Kings in the third round of the NHL draft he found himself traded by his junior team over the summer. He was off to join the Gatineau Olympiques and a few months later he attended Team Canada’s evaluation camp for the 2011 World Junior Championships.

Things were falling into place for a breakout campaign from the Quebec Major Junior Hockey League (QMJHL) defenseman. Then, a knee injury occurred early in the season, putting him on the shelf for over a month and gone was any hope of playing at the WJC.

He pressed on, came back from the injury, posted solid numbers and tonight he made his return to the playoffs.

MM: You guys finished the regular season with nine straight wins. How much confidence does that give you and the team heading into the playoffs this weekend?

ND: I think it’s good to finish the season with a win streak. It’s good for the confidence and it probably prepared us for the playoffs. Finishing with nine wins is very good.

MM: Every player loves to pad their stats as much as possible and add to their totals. So, how did you feel about being held out of the last few games of the season?

ND: I don’t know. I didn’t really think about my points and all that stuff. I just wanted to help the team and I think we had a good season. All of our top scorers were out, but we were there for the team.

MM: For the last game of the season Gatineau played fellow prospect JF Berube‘s team, Montreal Junior. The two teams also played five other times throughout the season. What did you think of Berube’s play in net this year?

ND: He has a lot of confidence in the net and he makes the key saves at the right time. Last year when I was in Rouyn I didn’t play a lot against him. But, this year I saw how good he is. I think he’s a very good goalie.

MM: Regarding your stats, you were tops on the team among defensemen with 13 goals. Of course, due to the knee injury you were limited to 48 games. Had it not been for the injury earlier in the year, would 20 goals have been possible?

ND: I think so. When I was injured I was going on a good streak and again when I came back. I think in the 20-ish games that I missed, I probably could have scored, maybe, another seven or eight goals. So, I think I would have attained that number.

MM: You were also +22 for the year. Some defensmen don’t like the plus-minus stat. Is it something you look at?

ND: I don’t look at it really, like all my stats – I don’t look at them much. But, for sure, if you look at the plus-minus, I try to finish in the plus. Regardless of other things happening in the game. I don’t think you can ask for more than +22 in only 48 games. I think that’s good.

MM: How is the injury, are you fully healed now or is there still a little soreness on occasion?

ND: For sure when I came back, I wanted to come back so quick. So, maybe the first two or three weeks of the comeback were rough a bit. But, I think now I’m fully repaired and good for the playoffs.

MM: That injury was also a setback in your goal of making the Team Canada roster for the World Junior tournament. I’d assume playing for Team Canada is still a goal for you at some point…

ND: For sure. That was one of my main objectives this season. The injury happened not even a week before the camp. I was mad at the injury, but even more so because it wasn’t good timing.

MM: Both you and Berube, despite putting up strong seasons, you guys seem to fly a little under the radar compared to other Kings prospects. Is that because you play in the ‘Q’ and not one of the other junior leagues?

ND: I don’t know. For sure, our scout from the ‘Q’ is doing his job. I think it’s probably harder because LA probably looks more at the WHL and the OHL because they talk more about them. But, I don’t know. I think Denis Fugere (the Kings’ Quebec area scout) is pretty good at scouting. We’re probably at the same place as the WHL and OHL guys.

MM: Per the CBA, the Kings need to get you signed to a contract before June 1st (because he was drafted in 2009).  How are negotiations going and will a deal get done in time?

ND: I didn’t talk to them too much. I’ve talked a lot with Nelson Emerson and Mike O’Connell (both work in the Kings player development group). But, I don’t think about it. If I think too much about it, maybe it will effect my game. So, I just don’t think about it and what’s going to happen is going to happen. For sure, I really want to sign with LA. But now, because of the playoffs, I’ll just try to prove myself more to give them a reason to sign me.

MM: Recently the Kings traded one of their top defensive prospects, Colten Teubert (in the Dustin Penner deal). When something like that happens, in a sense, are you happy because it creates one less defenseman standing between you and the NHL?

ND: For sure, because he’s a first round pick you think about it. But, there’s also new players every year. So, you never know. It changes things a bit. But, it doesn’t change a lot because each year there is another draft and the team will get more defensemen or forwards. I was surprised though. I didn’t expect that. But, I still feel the same as when he was there.

MM: Let’s wrap up with a playoff preview. You guys are playing the Rimouski Oceanic – size up the series for us.

In game one Friday night, Gatineau beat Rimouski 6-0. I guess they must have played a disciplined game, as Deslauriers predicted.

He finished the game with one assist. Surely he’ll be looking to add to his totals when the series resumes on Saturday night.

In case you’re wondering, the way the playoff bracket falls, Berube and Deslauriers can only meet up in the QMJHL Championship series. Now, that would be exciting.