You are here: Home / NHL / Ducks / Dustin Penner Looking to Bring the Penner Cup to LA 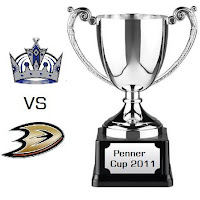 Tonight will be another first for Dustin Penner, as he suits up for the Kings against their cross-town rival – and his former club – the Anaheim Ducks.

Players always have a special bond to their first team. It’s usually the team that drafted them or where they scored their first goal. And if they happen to have won a Stanley Cup there, as Penner did in 2007, the attachment is even stronger.

However, unless you’re Steve Yzerman or Joe Sakic, at some point reality sets in – hockey is a business and that guy is traded or leaves town a different way. When it happens, it’s jarring. A new city, new teammates, a new routine and so on.

Then, if it happens again (and it usually does), the transition is often much easier on all involved. Guys have a thicker skin at that point.

So, tonight’s game vs. the Ducks won’t stir up all the same feelings for Penner as it did when he first played the Ducks in 2007 as a member of the Edmonton Oilers. Still though, it means just a little more than most regular season games.

MM: How different will this be for you, the ‘first time’ against Anaheim as a member of the Kings?

DP: I think it’s a lot different. I remember what a big rivalry it was when I was with the Ducks several years ago. It should be interesting, especially with the position of the teams and how the season has been going for both clubs. It’s been a hard fought series too and it always has been. Both teams are in a playoff position now and looking to increase their lead.

MM: They’ve had some turnover there, like every team in the league. You still have some friends there though, right?

DP: Yeah – Georgie, T-Bone, Selanne, Getz, Perrs – I know Bobby, Luca Sbisa too. There’s a few guys I still keep in touch with and that’s all fine and good until the game starts. Then, you have to go to work.

MM: Have you talked to any of those guys this week or have there been any text messages leading up to the game?

DP: Yeah, it was Bobby’s birthday (on Thursday). I talk to Getz periodically. You know, with other guys on different teams, no matter where they’re playing, you always have different schedules. So, it’s hard to keep up with them. When you get a family it’s even harder. Once and a while we text or through a buddy (we’ll talk).

MM: Are you aware of your numbers against the Ducks, is that something you keep track of at all?

MM: Well, not as strong as your totals against some other Western Conference teams. Only four goals in 16 games against the Ducks.

DP:  Huh, maybe we won though.  I think we won a lot of the time against them.  I remember we had the Penner Cup when I was in Edmonton.

DP:  Because of the situation, with how I came from the Ducks over to the Oilers (signing an offer sheet with Edmonton in the summer of 2007, which Anaheim didn’t match), it was just an on-going joke in the dressing room and we had a little trophy.  And I know we won that a few times. So, we won the season series, I know that.

[upon further review – yes, in 2007-08 (his first season with the Oilers), they beat Anaheim the first three times they played and won the season series 3-1…in 2008-09 Edmonton won the series 2-1-1…last season they were swept, with the Ducks going 4-0…then, prior to the trade this season, the Oilers went 1-2-1 vs. the Ducks…so, the Penner Cup has been on the shelf for two years now]

MM: Well, you’ll be seeing a lot of them here to end the season – three times in the final 11 games.  Does that still mean a lot to you at this point?

DP:  I’m sure no matter what team we’re playing it would mean a lot because they’re inside our division and they’re below us.  So, if we win those three games and get the six points outright, it puts us in a really good position.

And it would bring the Penner Cup to LA.