You are here: Home / NHL / Kings / Dustin Brown Remembers When Kings Were Spoilers 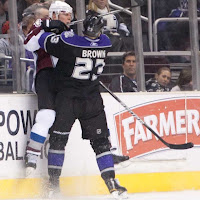 However, the season ending injury to Anze Kopitar will have a ripple effect throughout the team, as nearly every player will be asked to step up and take on more responsibility – maybe none more than rookie Trevor Lewis, who has been bumped up to the second line with Dustin Brown and Ryan Smyth.

After practice today, the captain spoke about his new center and the possible danger waiting for the team in Edmonton:

MM: Thoughts on playing Edmonton tomorrow night, a team at the bottom of the Western Conference…

DB: They’re there, but they’re kind of going through that transition of rebuilding and they have a lot of good, young, skilled players. I remember it wasn’t too long ago, maybe, that we were that team and tried to be spoilers. They definitely have the one-on-one skill and high-end skill that, if we’re not ready to play, they can beat us.

MM: As the captain and a veteran on the team, what type of advice are you giving Trevor Lewis (who sits next to him in the locker room) about his expanded role with Anze Kopitar out?

DB: He has really good skill and he really thinks the game well. So, it’s just a matter of keeping things simple, especially early on in games. After a couple games he’ll probably be adjusted to having more minutes. That’s probably the hardest part physically. Increasing your ice time by maybe five minutes is a pretty big step. He’s been really good on the penalty kill for us and now we need him to contribute more offensively. I’m sure he’ll be fine.

Things started off better than expected when Smyth and Lewis each scored third period goals on Saturday.  It was Smyth’s first goal in 15 games and the first time Lewis had found the back of the net since December 27, 2010.

Dustin Brown Ready For Something New

What Shoulda Been – Kings vs Oilers, November 2009

Dustin Penner on His First Trip Back to Edmonton