You are here: Home / NHL / Canucks / Coach Murray on What He Wants From Dustin Penner

When Kings GM Dean Lombardi acquired forward Dustin Penner at the NHL Trade Deadline last Monday, coach Terry Murray knew many things about the type of player he would be inserting into his line-up soon thereafter.

‘Big body’ is one of the first things that nearly every person mentions when speaking about the 6’4″ left wing.

However, now that he’s had him for a two games and a few practices – including this morning, where Murray spent several minutes on the ice advising him one on one – what does he think of his overall game so far and what would he still like to see from Penner?

TM: That’s all the conversation was, just overall you know – more relaxed, settled it, feeling more comfortable. That kind of conversation. Obviously, as days go by he’s going to relax more and feel that he’s understanding what it is that we’re asking of him – structure, system. So, it’s been good. I also addressed, in the conversation on the ice, the winning goal (scored by Vancouver yesterday). The puck comes around the board and a big body like that, I would like to see him just finish on that defenseman and make sure the puck gets out of the zone. I know there was a support guy, the ‘D’ pinched, and I think (Alex) Burrows kept the puck in at the blueline. To me it’s a a matter of that’s where you dig in and get the puck out of the zone at any cost and play hard and physical on them.

MM: When you say ‘relax a little bit’ does that mean he’s been a little hesitant at times?

TM: No. I don’t think hesitant, just relaxed. It’s been a very intense probably month, maybe longer, for him. His name surfaced almost every time there was a conversation about Edmonton on the trade deadline approaching. So, that kind of relaxing. Now it’s done, it’s over, become part of the LA Kings as quickly as possible, just by relaxing and getting to know your teammates.

Coach Murray Likes What He Sees

Chirping with Dustin Penner – interview from his first Kings practice 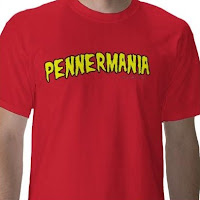