You are here: Home / comments / Chirping with Dustin Penner 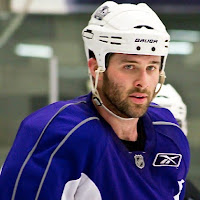 Have you heard? The Kings acquired a left wing on Monday from the Edmonton Oilers.

Of course you have!

By now, most Kings fans know the basics on Dustin Penner. He’s a big forward (6’4″, 245 lbs), under contract for one more year and will play on the top line with Anze Kopitar.

Apparently, earlier this season some Kings fan told him he wasn’t needed in LA – but GM Dean Lombardi traded for him anyway.

Truth be told, he was needed and Lombardi made the right call.

After practice today Penner was all smiles and had plenty to say to the larger-than-normal group waiting for quotes.

I had a few questions for him too, but first here’s a sprinkling of some of the other areas covered…

Regarding the system: Most teams start with the same building blocks and then branch out from there. It shouldn’t be difficult for him to get acclimated.

His remembers Kopitar when he first broke into the league, “obviously he’s excelled and improved tremendously as a player.”

The Kings as a whole – he sees them as “physical” with “really good defense play” and a group “with a lot of key pieces to make a run (at the Stanley Cup).”

He also said they are “well coached” and have “great goaltending.”

So, it wasn’t much of a surprise when he added “I really like what I see here…as far as the big bodies and cycling the puck and playing down low.”

He may have been listening to (or reading some of) coach Terry Murray‘s press conferences this year – because this one sounded very familiar – “A lot of offense comes from second and third chances, not just one and done. With the people and personnel we have here, the skill we have on the defensive side of the puck to get it out and keep it in, it should be good.”

Coming to LA where the expectation is to make the playoffs will be “different,” but he was very clear that his personal expectations have never been based on what people say about him. He says he usually listens to his “bosses” – so, “whatever the GM and coaches wanted from me, that’s who I try to be as a player.”

“I didn’t focus on what the TV told me that I should be.”

DP: Yeah, that was a really good series. It was tough against them. Obviously, back then they were a more defensive minded team. The memories I have there I’ll cherish for the rest of my life. I think a lot of guys who have won a cup know what it’s like and know all the different things you go through as an individual and as a team to get to get that end goal. A lot of things have to happen, have to line up. But, I think it’s the overall heart and determination of the team as a whole that gets you as far as we did.

MM: The recap of a December 2004 AHL game says you and Jarret Stoll got into a fight that night. Do you remember what happened?

DP: Maybe he knocked me out because I have no idea what you’re talking about. [note: There was some confusion at this point. He thought I was asking him about fighting Matt Greene. So, I clarified – no, Jarret Stoll] Stollie? I don’t know how it went. I’m sure I overpowered him. I’ll have to go check hockeyfights(.com) after this. I guess I should have checked before I said that. But, I think it was more of a wrestling match and I don’t think there were any punches thrown.

MM: Unfortunately, there isn’t any video of it on hockeyfights…

DP: Well then I have more to tell you!

[note: Stoll’s reaction to the same question is up here]

MM: Recently, some of the Oilers have been training during the summer with Chad Moreau, Ethan’s brother, here in SoCal. Did you train with Chad at all?

DP: I did. Now I spend time down in Newport with the Scott Boras group, PMC. I work with his trainers. He’s not my hockey agent, but his agency, his management company represents me and takes care of my training and all that stuff. So, I train at a facility at Soka University down there with (note: he listed a bunch of guys – including Steve Odgers, Ryan Getzlaf, Scottie Upshall and Bobby Ryan).

Game one for #25 should be tomorrow night vs. the Coyotes.

As always, more with Penner soon.