You are here: Home / hockey / WWFD: What Would The Flyers Do? 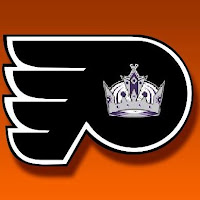 It’s just too easy to compare the Kings to the Flyers.

So, when trying to figure out what Trade Deadline Day might bring in LA, perhaps a look out east to Philadelphia might be in order.

Last year, the Flyers were considered one of the Stanley Cup favorites heading into the season.

Then, they went through early season troubles – where the weren’t producing up to expectations.

At the trade deadline they did little to improve their club, as their sole deal for the second half push was acquiring forward Ville Leino from Detroit for defenseman Ole-Kristian Tollefsen and a fifth round draft pick.

He scored two goals in the remaining 13 games for the Flyers. Hardly a major addition offensively.

In the standings, the team pushed hard to dig out of the hole they created for themselves in the first half. It took all the way until the final day of the season for the club to officially qualify for the post season.

As everybody knows, they rode some hot goaltending and strong defense all the way to the Stanley Cup Finals.

The Flyers went 12-5 through the first three rounds of the playoffs – only losing once in the first round and once in the Conference Finals.

While the Chicago Blackhawks ultimately won the Cup, the Flyers easily could have come out on top in the series.

Maybe there’s something to be said for not messing with chemistry.