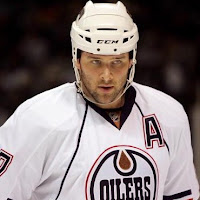 In Dustin Penner he got a 29-year old left wing who’s under contract for one more year and brings plenty of size, at 6’4″ 250 lbs.

The deal was Penner for Colten Teubert (a former first round pick), the Kings 2011 first round pick and a conditional pick in 2012 based on LA’s playoff performance (either a second or third rounder).

[Update: The condition on the 2012 pick is this – if the Kings win the Stanley Cup this year, it becomes a second round pick. Otherwise, it’s a third rounder.]

Teubert was originally selected 13th overall in 2008 after the Kings made multiple deals to end up with the pick, including moving Mike Cammalleri to Calgary.

Using our popular 10 Tidbits format, here are some items to help you get to know the newest Kings forward…

* Penner is a former Duck, who now becomes one of the few former Anaheim players to ever end up wearing a Kings jersey. He left there under some rather controversial circumstances though when the Oilers signed him to a five-year, $21-million offer sheet (something most GMs have been unwilling to do). In fact, it created quite a war of words between the Ducks and Oilers.

* He’ll be another former college player in the Kings locker room, having played at the University of Maine. They’re already near the top of the league in this category – with guys like Jack Johnson, Willie Mitchell, Matt Greene, Rob Scuderi, etc. having all played NCAA hockey.

* In 2004 Penner and Maine went to the NCAA Championship game vs. Denver. In the semis they beat a Boston College team that included current King Peter Harrold and former King Brian Boyle.

* A few years later, the big left winger won a Stanley Cup in what was officially his rookie season with the Ducks – even though he had played 19 NHL games the season before. Per NHL rules “To be considered a rookie, a player must not have played in more than 25 NHL games in any preceding seasons.”

* He wore #17 in Anaheim and #27 in Edmonton. Obviously, those numbers are taken by Wayne Simmonds and Alexei Ponikarovsky.  If he goes with #37 in LA, he’ll become the 11th Kings player with that number – joining a list that includes former Duck Kip Brennan, former Oiler Denis Grebeshkov and fellow Maine Black Bear alum Patrice Tardif, who was part of the deal that saw Wayne Gretzky leave LA for St. Louis.  [update: he’ll wear #25 in his debut for the Kings on Thursday night]

* Over the last four plus seasons he’s only missed four games.

* Last year he played in all 82 games and scored a career high 32 goals and 31 assists.

* Away from the rink, his significant other is a Montreal-born actress who recently has been living in LA.

* He’s expected to play on the top line with Anze Kopitar. He also was teammates with Jarret Stoll and Matt Greene from the 2007-08 season in Edmonton.

* Penner says he was playing ping pong at the time of the trade. And he’s glad it went down went it did because he was about to lose $50 to Shawn Horcoff.

The most positive aspect of the deal?  The Kings didn’t have to give up any players on the current roster – namely Wayne Simmonds.

Penner needs to produce though to make the hefty price not seem so bad.

For now, it seems it a bit rich.

Kings Kids Are All Right – Or Are They?